The dancer is a woman with short blonde hair in a bob cut. She has a black sequined dress, red tights & black high heels.

The Prom Night dancer is a teenage girl with long, curly brown hair, a pink and purple prom dress, gold high heels, a white flower bracelet and a silver tiara.

According to a leaked square, the routine was going to be a Trio Sing-Along routine.

The lead dancer, a woman, has pink, poofy hair tied up by a bunch of purple ribbons. She is also in a sleeveless peachy gown with a pink tutu, as well as a long purple flowing dress.

Her dress turns blue during the chorus, and her top turns to a light shade of purple. Her tutu turns cyan.

P1, a girl with mint-turquoise hair tied in a braid, is in a single-sleeved pink top with fuchsia frills. She is also seen wearing a purple wristband on her left wrist. Purple ribbon bows are also seen on the frills, and she is wearing a pair of long peachy jeans.

Her hair also turns pink during the chorus, as seen in the leaked image. Her shirt turns cyan, and her jeans turn magenta.

P3, also a girl, has a similar hair concept when compared with P1. She is wearing a similar top, but there are no frills. Instead, a large purple bow acts as a belt around her waist. She is also wearing a flowing peachy dress with purple bows. She also has a pink ribbon tied up as a carnation band around her left wrist.

Her hair also turns pink during the chorus, and her top also turns cyan. Her gown turns to a shade of wine-pink, and her bow-belt turns into a dark shade of pink.

The background for the original is a dance floor, with the music video for this song. The alternate is a high school prom with a sign that says ABBA.

According to the leaked square and the gameplay found in the files, the routine was to be set in a fairytale wonderland with pink clouds, a mint-tinted sky, mirrors and disco balls.

The scene would also change to that of a night scene. A pink light can be seen shining from the sky, as well as colorful stars. A garden of glowing flowers can also be seen in the field of clouds.

There are 3 Gold Moves for the Dance Floor version, all of which are the same.

There are 3 Gold Moves for the Prom Night version, all of which are the same. 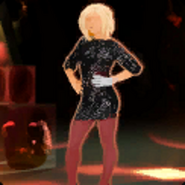 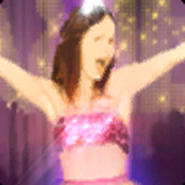 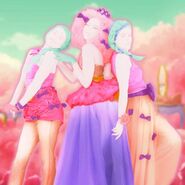 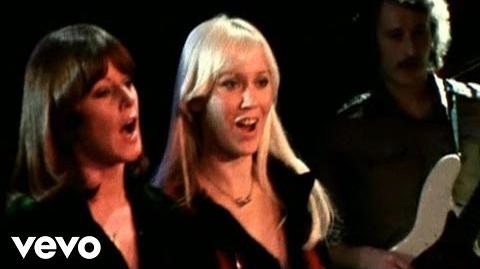 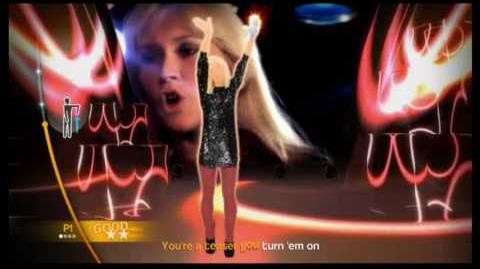 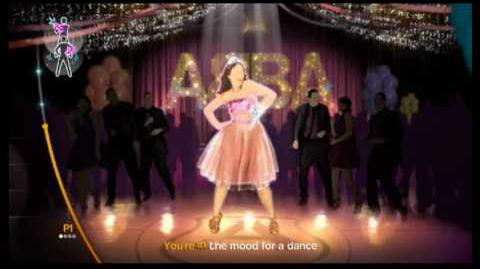