Everybody Needs Somebody To Love

"Everybody Needs Somebody to Love" by The Blues Brothers (covered by Dancing Bros. in-game), is featured on Just Dance 4.

The dancers are both men wearing single-colored shirt under their black and white striped prisoner outfits. P1, who resembles Elwood Blues, wears orange and P2, who resembles Joliet "Jake" Blues, wears yellow. At certain points during the choreography, the prison uniforms flash with various bright colors. They also wear navy blue fedoras and each wear a pair of sunglasses. They also wear yellow boots. Both of them have a sky blue outline.

There are five dancers in the alternate mode, in order being male, female, male, female, and male. They all wear similar suits to the classic mode. In addition to the similarity, they also wear fedoras, sunglasses, and black boots. The middle dancer is seen with the upper half of his suit pulled down, wearing a blue tank. 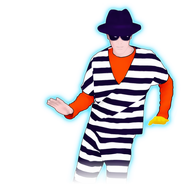 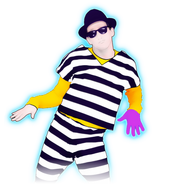 The background is outside a prison facility with garbage cans on the walls; sometimes, saxophonists pop out from them. Spotlights can also be seen, along with the lit windows right behind the dancers which are moving and criss crossing.

The Classic routine has 2 Gold Moves:

Gold Move 1: Move your arms in an inverted circle.
Gold Move 2: Hit your elbow down. P1 raises his left knee. P2 jumps first then does it. These are the final moves of the rountine.

The Hold My Hand routine has 3 Gold Moves:

Everybody Needs Somebody To Love 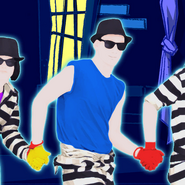 Everybody Needs Somebody To Love (Hold My Hand) 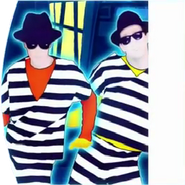 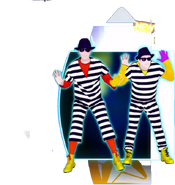 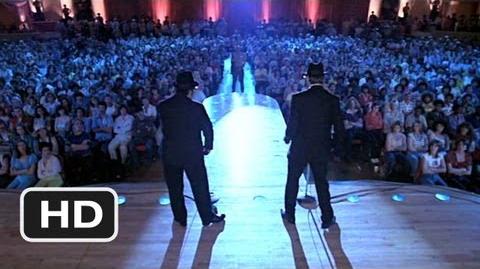 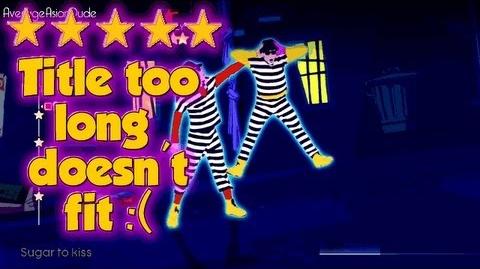 Just Dance 4 - Everybody Needs Somebody To Love - 5* Stars