Giddy on Up (Giddy on Out)

Hold My Hand
(not available on the Xbox)

"Giddy on Up (Giddy on Out)" by Laura Bell Bundy is featured on Just Dance 3.

The dancer is a woman that has a mini blue top hat resting on the left side of her pink hair. She is wearing what seems to be a magenta halter top with pink ruffles laced on the top under the chest area and just below the hip in a V shape. There are white stripes going from the ruffles under the chest area to the ruffles just below the hip. She is also wearing a dark blue knee length skirt that is tied up at the left and right sides of her hip to create a shorter skirt, and the middle area of the skirt has ruffles. She is wearing purple stockings that reach well over her knees. She is also wearing heels that have blue cloth on them.

On the left side there is a dark red curtain rimmed with golden fabric at the edges, beside that is a barrel and on the top right side of the barrel is a paper that says 'Giddy On Up' followed by words too tiny to read and under those words it says 'giddy on out' in very tiny letters. on the top right side of the poster there is the skull of a bull. On the bottom right side of the paper there is a metal chair and on top of it there is a boa the same color as the dancers hair, which is falling off the chair. On the right side there is a curtain identical to the one on the left. Next to the curtain there are two wooden shelves. The top shelf has 7+ bottles of unnamed drinks, And the bottom shelf has only 7 drinks of unnamed drinks. Two drinks are labeled as 'xx' and one bottle has a 'xxx' on it. The wallpaper is a bright gold which seems to fade near the door. There are lights right above the floor near the back. In the middle there is a dark brown door which is open for the whole song.

The Classic routine has a total of 2 Gold Moves which are both the same:

Both: Kneel to your left while crossing your right leg behind the left one and pretend to shoot.

The Hold My Hand routine has a total of 3 Gold Moves, all of which are the same.

All: Raise both hands up.

Giddy on Up (Giddy on Out) appears in the following Mashups:

Giddy on Up (Giddy on Out) appears in Puppet Master Modes in Just Dance 4. Here are the captions attributed to her dance moves:

Giddy on Up (Giddy on Out) on Just Dance 3 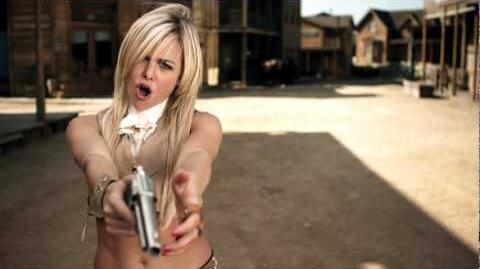 Laura Bell Bundy - Giddy On Up 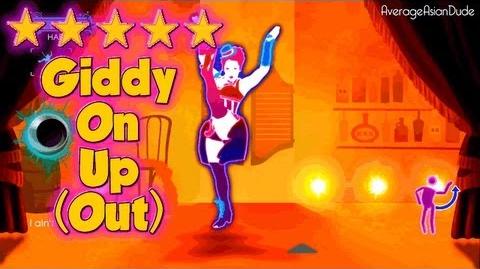 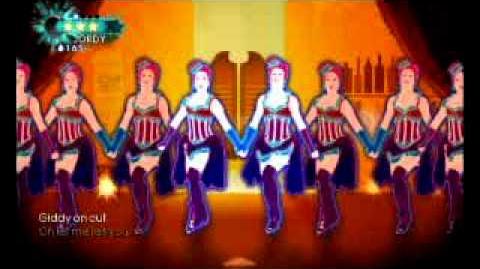