"ジャンピン(Jumpin)" by KARA is featured on Just Dance Wii.

The dancer is a woman with blue hair gathered in a fluffy tail, yellow cropped shirt that looks like a jacket, matching shorts with a black and white patterned part and high black heeled boots.

All: Punch the air once with both of your hands. 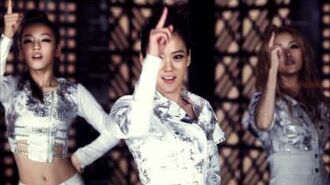