"When The Rain Begins To Fall" by Jermaine Jackson and Pia Zadora (covered by the Sky Trucking in-game) is featured on Just Dance 2016.[1]

P1, the woman, has blonde fluffy hair and wears an olive green studded shirt, olive green pants with the knees exposed and with red straps, and black boots.

P2, the man, has long black hair and wears a red suit with a copper shoulder pad and accents, and black boots.

The dancers stand on top of a truck with pink lights. This platform runs through a desert landscape with trucks following them. After a fire explosion occurs, a rainbow circular gradient flows inward and confetti sprinkles over the dancers. The desert returns in nighttime.

There are 2 Gold Moves in this routine, both of which are the same:
Both Gold Moves: Lift your right arm.

When The Rain Begins To Fall appears in the following Dance Quests maps: 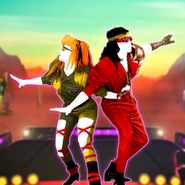 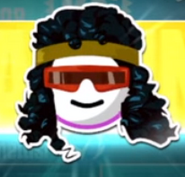 In the menu
When the rain pictos-sprite.png
Pictograms 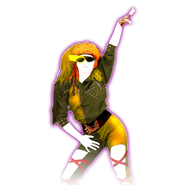 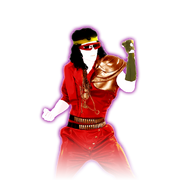 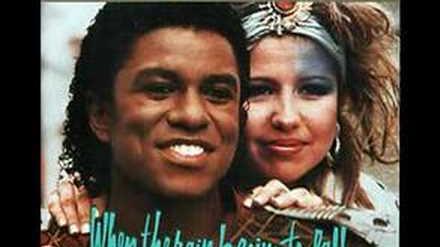