P1 is a woman. She wears a bright sky-blue crop-top with the jersey number '08' written in the front, in medium blue, but cut out at the bottom due to cropping. The crop top has two wide lines of the same medium blue over the sleeves, which are rolled up to right below her elbows. The back of the tee has a golden rim. Underneath she wears a tight black blouse. For her bottoms, she sports a pair of violet leathery leggings, with a black fanny-pack/bum-bag around her waist, with blue straps. She has a black-and-blue sports knee brace around her right knee and wears blue sports-shoes with orange designs and white soles. She has a black wristband on her right hand. She has short hair with a curly fringe, swiped to the left, and covered with a light pink sports cap with a blue strap, worn backward. She also wears sunglasses with a pink rim.

P2 is a plump woman. She wears a black tank top, over which she wears a bright orange crop-top. Over that, she wears a jacket which is orange, blue and violet, the sleeves being rolled up a little. She wears a few black necklaces. Her bottoms are a pair of blue denim short-shorts. She sports violet socks with black boots. Her hair is black, tied in a left-sided high braid, intertwined with purple extensions. She also wears sunglasses.

P3 is a woman. She wears a tight one-piece swimsuit which has a four-sectioned design, vertically-opposite sections being colored the same - two sections are violet, and two are blue; the lower one is striped with two shades of blue, while the upper one has a checkered pattern with the two shades of blue. Her bottoms include a pair of orange sweatpants with violet-and-blue stripes on each side. The lace of the sweatpants is purple. Her shoes are black velvet heeled-boots. She wears a wristband on her right hand, similar to P1. She also wears a black choker. Her hair is purple, long and tied into dreadlocks, and then bundled into a low ponytail. Over that she wears a sky-blue bucket hat. She also accessorizes with a pair of sunglasses and blue hoop earrings.

P1 is a mouse. It has a pink bow and wears a striped long-sleeved pink and yellow shirt, a pair of pink pants, a pair of yellow socks, and a pair of light blue shoes. It squints and has a front tooth.

P2 is a pink hippo dressed as a policeman. He has an orange band around his eyes as well as a black mustache. His outfit is mainly a police officer’s outfit. His wardrobe consists of a cyan uniform and a cyan police hat, a black police radio on his shoulder, a black belt, and a pair of orange boots. He also has a lime green police baton stored in his right pocket.

The routine takes place in a white area with walls that show part of the lyrics. The wall colors can vary between yellow, pink, maroon, orange, and sky/royal blue.

The background shows a street with a hole being dug, then a prison with four cell doors, a couple of lights, a hideout with cupcakes, an alley, and then all four places together in a montage. The title to the song can be found in the background.

2 Gold Moves have been revealed for the Alternate routine: 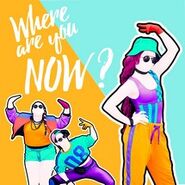 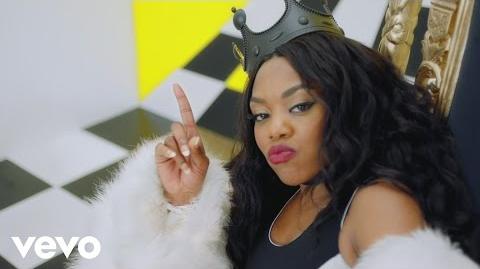 Lady Leshurr - Where Are You Now? (Official Video) ft. Wiley 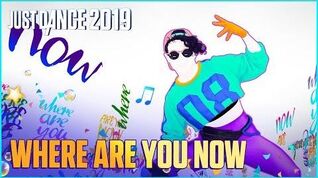 Where Are You Now? - Gameplay Teaser (US) 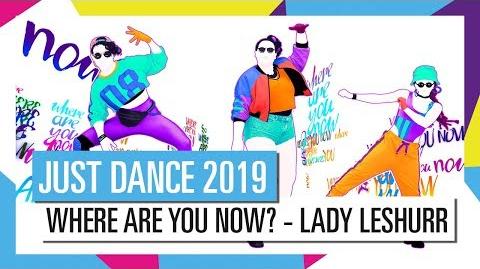 Where Are You Now? - Gameplay Teaser (UK) 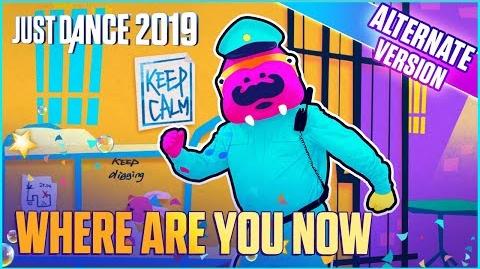 Where Are You Now? (Alternate) - Gameplay Teaser (US) 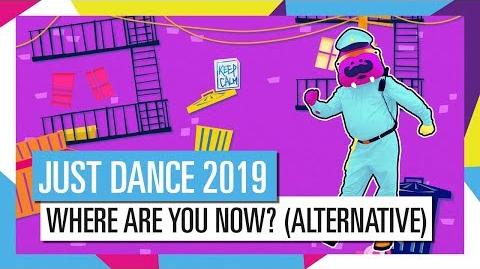 Where Are You Now? (Alternate) - Gameplay Teaser (UK)