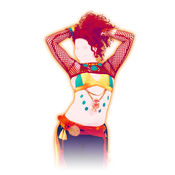 The dancer is a red-haired woman with with purple shadows and red highlights. She also has circular, turquoise markings on her stomach and several bracelets. She wears a red fishnet long sleeve crop top, a gold and turquoise bra, blue leggings, and a gold and pink fringe skirt. She resembles Shakira from the song's music video.On the bra their is a Peru styled amulet with wooden carvings in it.

The dancers are both men with black hair in buns. They wear white air-inflated fat suits, which come with mawashi belts. P1's belt is red and P2's belt is green. 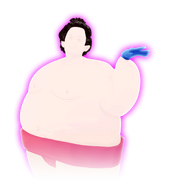 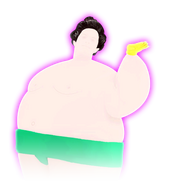 The background is a red desert with large mountains. The sky and mountains receive glowing tiki patterns. There are end tables with fires on top, whose bases glow red and also receive the same patterns as the sky and mountains. The sky changes from sunset to nighttime. Two different backup dancers, one male and one female, are seen with outfits similar to Burn and P4 from Lean On and black skin. These dancers are each duplicated behind.

The background takes place in an outdoor wrestling floor with a golden gong, a pagoda roof, fireworks, and jumping maneki-nekos. The background blackens and spotlights on each dancer who makes leading moves.

There are 2 Gold Moves in this routine; which is all the same.
Both Gold Moves: Scoop out your arms.

Hips Don't Lie has an unlockable Mashup with the theme Caliente. 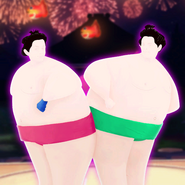 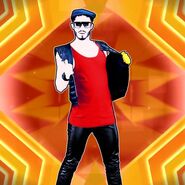 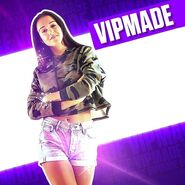 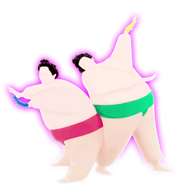 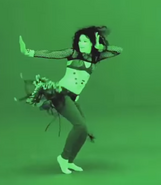 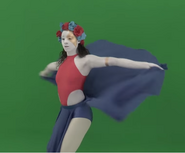 Behind the scenes 2 (Background dancer)