The dancer is a woman with pink curly hair. She wears a red, yellow, and aqua long sleeve shirt with a black feminine eye that has a blue pupil, red, yellow, and blue shorts, blue and red dotted thigh-high socks, and yellow and black polka-dot lace up heels.

The background is first seen to be a field of pink, yellow, green, and blue squares. A stick of red lipstick appears around frantically. Afterwards, some colored lips appear, which is a similar concept found in My Lips. Afterwards, a panel of feminine eyes with eye shadow, mascara, and eyebrow penciling appears on various different-colored squares, these squares being colored differently from the larger backdrops, which will vary in color. It is soon followed by pointed feminine hands and the word "bang". Underneath the colors are female heads and faces, which burst in the background along with lipstick and the "bang" panel. Next is a side view of a woman's face with yellow lipstick and a pattern of blue and pink. The pink panels flash red briefly.

There is 1 Gold Move in the routine:
Gold Move: Throw your hands up. This is the final move of the routine. 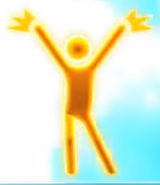 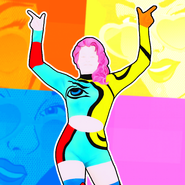 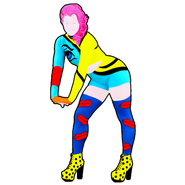 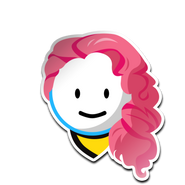