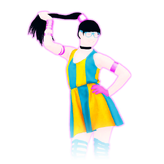 The dancer is a girl with black hair in a high ponytail, with a fringe. She wears a light blue and yellow striped dress, magenta arm bracelets and light blue striped stilettos. She also wears a pair of glasses and black chokers around her neck.

P1 wears a pink marshmallow costume with pink tights and peach sleeves. He has a yellow glove.

P2 has brown hair in pigtails, peach-yellow sleeves, an orange lollipop costume with a white swirl and orange tights.

P4 has black hair in a ponytail with a green bow shaped like a leaf, a green sweet costume with sky blue stars, green tights and green sneakers. 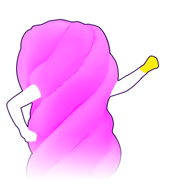 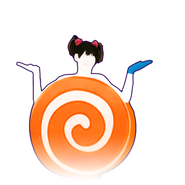 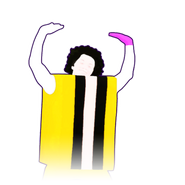 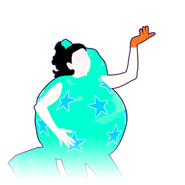 The routine starts with a black background showing shiny hexagons and neon saxophones. In the verses, it switches to a disco with colorful spotlights, neon animated palm trees into pink vases with light blue circles and a stage with two yellow staircases, which features rainbow neon flamingos. In the pre-chorus, the flamingos disappear from the stage and reappear behind a yellow and red wheel in front of the stage. In specific parts of the song, it switches back to the starting background.

The background is composed of various patterns in pastel colors with candies on them. At the beginning, various red and light pink lollipops forming line formations on a pastel pink background. During the verses, the background is a pastel blue checkerboard pattern with red and yellow lollipops appearing over each square. The light and darks colors on the checkerboard pattern constantly alternate, as well as the color of the lollipops. During the pre-chorus, the lollipops change into marshmallows, Creminos and sweets group-by-group, and the lollipops that are yet to be changed spin with the dancers' movements. As the chorus begins, the squares and lollipops disappear to reveal a pastel green background where more red and yellow lollipops appear in zig-zag line formations. When "ole" is sung, a few marshmallows, Creminos and sweets appear in the empty spaces between the lollipops. During the saxophone instrumental, the background is similar to that of the beginning but the lollipops are in a zig-zag formation like the previous background and they shake with the dancers' movements. During the bridge, a pastel blue swirl pattern appears like that of a lollipop, and orange and white marshmallows, blue and white lollipops, pink and white Creminos and pink sweets with white dots float around, moving with the dancer's movements and getting knocked away during the line "Sabe a vitamina". The dancers make more rain down through their movements, which shake to the beat of the song. During the last chorus, the candies space out with the beat of the song after INNA says "ole". The song ends with the saxophone instrumental background, but the candies fall out of the background.

There are 4 Gold Moves in the Classic routine:
Gold Moves 1, 2, and 4: Place your arms behind your head. The fourth Gold Move is the final part of the routine.
Gold Move 3 Clap to the left.

There are 4 Gold Moves in the Candy People routine, all of which are the same:
All Gold Moves:

All Gold Moves in-game
Add a photo to this gallery 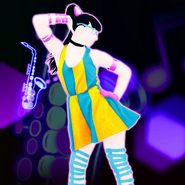 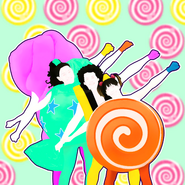 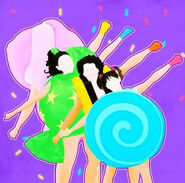 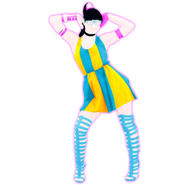 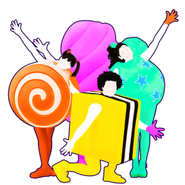 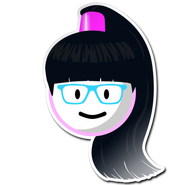 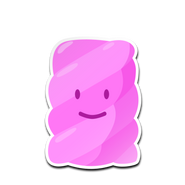 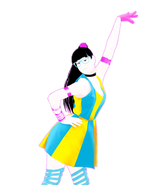