"Ghost In The Keys" by Halloween Thrills is featured in Just Dance 2017.

P2 is an anthropomorphic pumpkin: his head is covered by a carved pumpkin, and he wears a purple coat with red buttons, a black shirt underneath, a red belt, a purple-and-violet striped pair of trousers and black shoes.

P3 is a living doll: she has fuchsia hair with white highlights, pink skin, heavy make-up around her eyes, an aqua necklace, a yellow bra, a mint green sleeveless dress with yellow-and-black spotted parts and a white belt, along with a yellow-and-aqua striped part at the bottom, aqua and white striped high socks and violet heels. 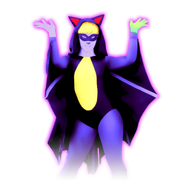 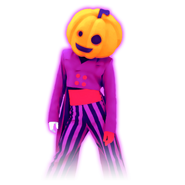 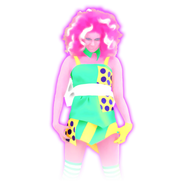 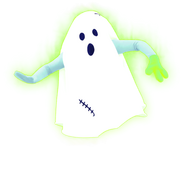 At the start, the background is set in an animated creepy graveyard with the name of the song at the top and features decorated with leafless trees and pumpkins. The creepy moon and the jumping pumpkins as well as a haunted house is in the background. At parts of the song, the background is changed to a dark blue showing doors, old-fashioned candles and more. Halfway through the song, the numbers on clocks are shown (the one on the left is in backwards towards a warp).

There are 2 Gold Moves in this routine.
Both Gold Moves: It is a Wave Gold Move and starts to the left. Make scary poses. However, the first gold move is a partial Wave Gold Move as P4's happens a pictogram after it. 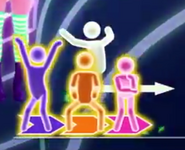 There is one Gold Move in the Mashup.
Gold Move: Slowly move your right arm upwards to the left, as if you are signaling someone to follow you. This is the final move counted in the Mashup. (Taste The Feeling)

Ghost In The Keys has a Mashup with the theme "Swag". This song features mainly male dancers. 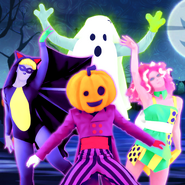 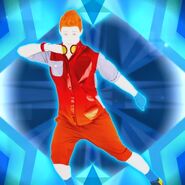 Ghost In The Keys on the Just Dance 2017 menu 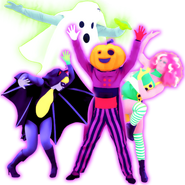 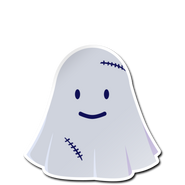 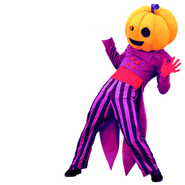