"PoPiPo" by Hatsune Miku is featured on Just Dance 2017.

The lead dancer is a girl, while the backup dancers are vegetables.

P2 is based off Hatsune Miku in the video for PoPiPo, similar to Ievan Polkka, with some minor changes. She has light blue hair in pigtails, a white short sleeve dress shirt with a blue tie, a red arm band, a black and blue skirt, black knee high socks, and blue and white heels. 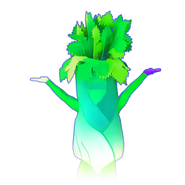 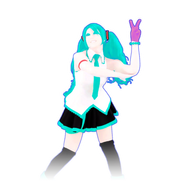 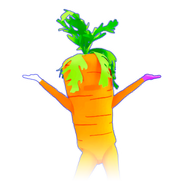 The song begins with a gardening can sprinkling water behind Miku, with the backup dancers emerging from the spots. The background features many common vegetables, such as carrots, tomatoes, pumpkins, onions, eggplants, and peppers, as well as cartons of vegetable juice. Miku starts the routine in front of a purple panel, while the vegetables are behind the panels containing them. The background switches to teal and white rays, with circling vegetables, as well as ones that duplicate horizontally. At the end of the routine, the backup dancers are inside glasses, turned in to vegetable juice, each cup garnished with the opposite dancer's vegetable.

There are 4 Gold Moves in this routine, all of which are the same:
All Gold Moves: 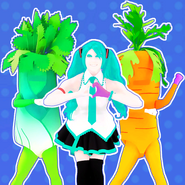 PoPiPo on the Just Dance 2017 menu 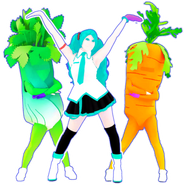 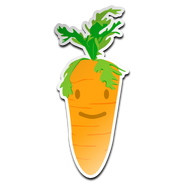 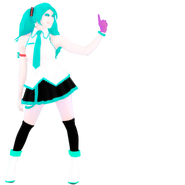 Behind the scenes of P1 and P3's choreography shooting