"The Greatest" by Sia is featured on Just Dance Unlimited and Just Dance Now.

The dancer is a woman with long green hair tied in a ponytail with a light purple bra with an indigo cropped tank with matching high-waist shorts, an orange glove, black and ankle boots.

The background starts in a dark room where the dancer is kept in a pink translucent box. The background has glowing lights shined on the dancer with pink and purple thin neon light poles hanging down. When "Don't give up" is sung, the poles slowly disappear by the end of the verses, it cuts to a room with huge double-doors opening with reflections of the dancer in various mirrors. When the bridge comes, the dancer is sent to the same room in the verses, except with opposite colors. The pink box and floor are now bright orange, with the box just being out of thin lines flashing every few seconds, then sent to the mid-chorus part of the background, the repeats the background from the chorus.

There are 3 Gold Moves in this routine.
All Gold Moves: Open your arms in a semicircle while stomping your left foot. 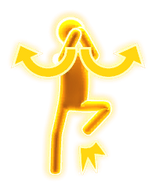 The Greatest appears in the following Dance Quest map: The Greatest on the Just Dance Unlimited menu (2017) 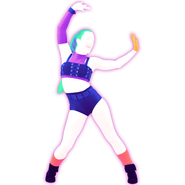 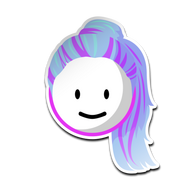 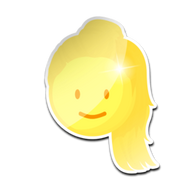 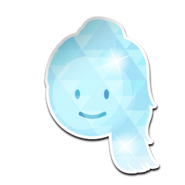 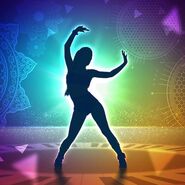 Background comparison
Add a photo to this gallery