The dancer is a futuristic girl with short blue hair. Throughout the dance, she goes through four transformations. She is first seen wearing a bright pink and white patent suit and wedges. The patent parts are visible on her arms, pelvis, rear, and legs. When the chorus starts, the girl's suit turns light and dark blue, and soon dons metal armor. Shortly afterwards, she dons a shiny metal helmet, a pink shoulder plate on her right shoulder, and pink plates on the ankles of her shoes.

The background starts as a simple white background, eventually evolving to show blue circuitry and pink lines connected to the coach. During the chorus, the background becomes a complex and dynamic futuristic landscape populated by flashing circuitry and rays of light.


All Gold Moves: With your right and left hands up and out, respectively, move both of your hands forwards and backwards quickly. 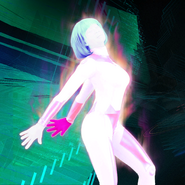 Titanium on the Just Dance 2017 menu 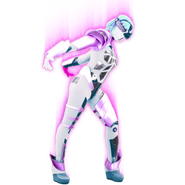 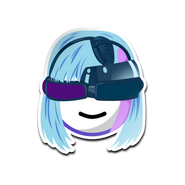 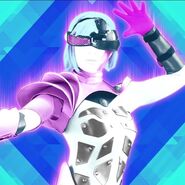 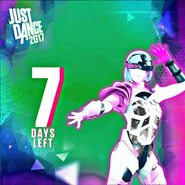