Just Dance 2016 is the seventh installment in the Just Dance franchise. The game was released on October 20, 2015 in the United States and on October 22, 2015 for the rest of the world, except for the UK where the release date was October 23, 2015.

Introducing all new game modes on PS4™, Xbox One™ and Wii U™ consoles, with more focus on online and sharing features: 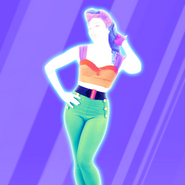 Meghan Trainor
All About That Bass
Добавить фото в галерею