The dancers are two men who are wearing space-like clothing.

P1 has tall bumpy top hair. He wears a pair of sunglasses, a red necklace, a silver suit with orange bracelets, a black watch, and a pair of silver shoes.

P2 has short black hair. He wears a pair of shades, a gold suit with purple bracelets, a black watch, and a pair of gold shoes.

The background begins in a black room with five doors, which open to different backgrounds. It then burns out to an array of backgrounds from previous songs in the series. Each returning background gets a brief, altered color tone.

All Gold Moves: Kneel down as if you are going to ask for someone in marriage, then stretch your hands forward and shake them and your right leg up and down. 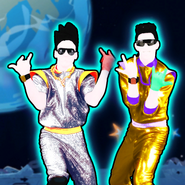 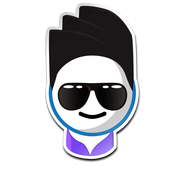