The Jackson 5*
(The Just Dance Kids)

The dancer is a boy with dark brown wavy medium-length hair. He wears a red suit with a white undershirt and a black bowtie, with grey pants and white sneakers. He also wears a black watch on his right wrist. On his chest is an emblem of the letter A.

The routine takes place in what looks like a town square. A pair of brown brick houses were placed on the side, with each has four green windows with flowers on the bottom. Two animals in each building (a brown canid/fox with a pink shirt and red suspenders and a bear with light grey shirt with a black tie on the left, and a yellow rabbit with a blue shirt and red suspenders and grey elephant with a periwinkle dress on the right) were present, looking out at the window. In the back of the background is a path with a few trees and a lamp post.

During the progress of the song, a yellow ice cream truck, driven by a light brown bear, is pulled to the center slowly. Clouds in the shape of the letters A, B, and C were floating on the sky.

The background dancers are girls who dressed similar to the main dancer. Their hairs are styled in curly odangos with light lime green ribbons and their chest emblems are B and C respectively.

There are 3 Shake Moves in this routine, all of which are the same:

All Shake Moves: Shake your hands and stand on one foot, like a penguin. 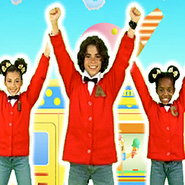 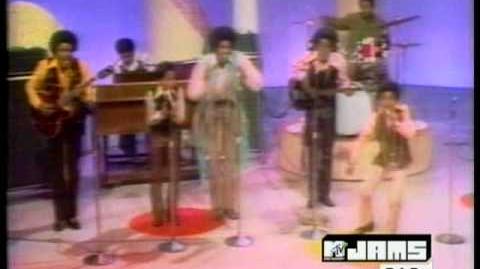 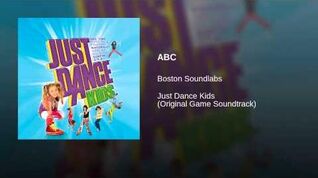 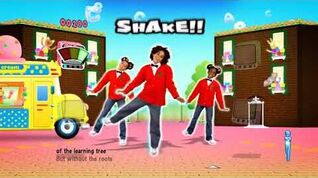