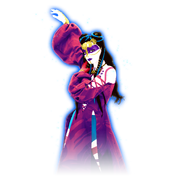 The dancer is a woman whose visual theme bears a semblance to ancient shamans. She has black hair, with two tied and braided buns on top of her head, several thick braided strands in frontal position and the rest of her hair positioned at the back in wild and unkempt style. The buns in her hair are tied with blue ribbons with bits of metal attached on it, and the braided strands have several golden rings and bits of gold attached on them. Two braided strands also blue ribbons wrapped around them. She wears a golden front tiara made of circles with sun-like designs, with the left and right side circles taking a more crescent shape, and has a golden ridge down to her nose, where golden chains are attached at the end and wrapped around and back to her head. She also wears a pair of golden hanging earrings with designs identical to her tiara and a thick golden necklace.

She wears a flowing robe, with numerous cuts and designs in the outfit. It changes its color during routine from blue-green during the intro and outro to dark magenta with purple highlights during the pre-chorus, then to a warm shade of purple during the chorus, followed by cold purple shade at the first half of each verse and indigo during the second half of the verse. It contains a V-shaped cleavage that reaches down to her navel and the neck and upper arm regions are bare, where ribbons are tied on the lower half of her arms and has straps in her shoulders. The sleeves are puffed up, with garters applied on the wrists, and the skirt section has long cuts that greatly shows her legs, leaving the midsection intact. On her wrists are golden tied loose bracelets. Underneath her robe is a light blue two-piece leotard, with the upper section sleeveless. Her body is adorned with tattoos and body paint, with the upper areas of her face painted purple, purple lips, a thin golden line running down at the middle of her lip to her chin, and pink and purples tattoo lines and dots on her arms, chest, and legs. Her left lower thigh has a golden band with numerous hanging threads and chains attached, while she has golden loose and chained anklets. Her glove is red. Her outline changes colors between gold, blue and dark pink and exudes small circular light particles.

The routine takes place in a dark jungle. At the beginning of the song, the character is visible in the Philodendron leaf area. Glowing golden lines are appearing and dissolving on a beat in different spots between leaves. Later on, we can spot the Philodendron leaf area, with glowing squares that has a light blue color. There is a transition, where glowing squares disappear and lots of fireflies starting to appear.

Also, in the background coach is spotted in the Areca palm area. Between palms, there are some red lines turned into circles. The lines have a glitch effect. In the next scene a blue ball that reminds a football ball, is moving in the middle of the areca palm area. A luminous ball spreads blue sparkles and occasionally a glitch effect appears.

Gold Move: Step out with your left leg and open your arms in a wide circle. 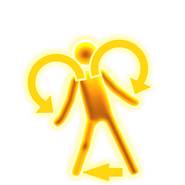 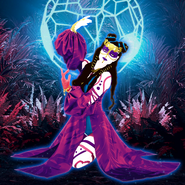 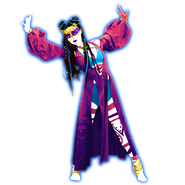 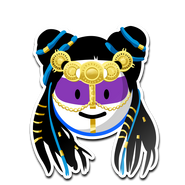 All The Stars on the Just Dance 2021 menu

All The Stars on the Just Dance Now menu (computer)

All The Stars on the Just Dance Now menu (phone) 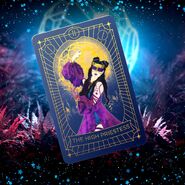 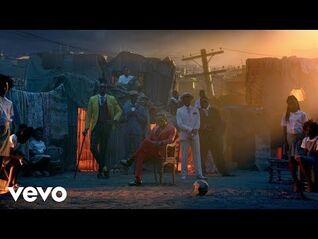 Kendrick Lamar, SZA - All The Stars 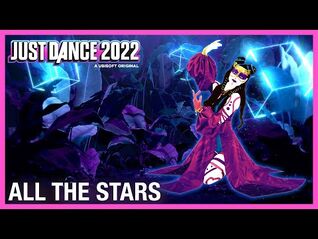 All The Stars - Gameplay Teaser (US) 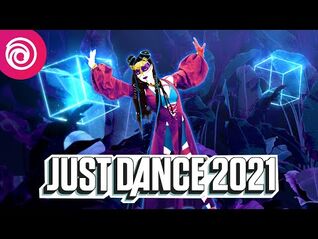 All The Stars - Gameplay Teaser (UK)