The dancer is a purple, female unicorn with large brown eyes and eyelashes and dark purple hair in a segmented ponytail. She wears a pink leather eye mask, a blue one-piece suit with connected thigh garters and leather pink, loose sleeves and a pink cape, three gold bracelets, a dark gold belt, and a pair of dark gold high heel ankle boots with thin, black laces. 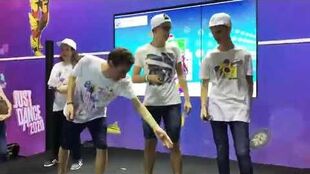 Retrieved from "https://justdance.fandom.com/wiki/Bassa_Sababa?oldid=1098540"
Community content is available under CC-BY-SA unless otherwise noted.