< Blinding Lights
View source
watch 02:58
No Man's Sky Update - The Loop
Do you like this video?
Play Sound

Files
1A: Ultramarine
1B: Midnight
2A: Purple Pizzazz
2B: Stratos

The dancer is a man with short black hair and a goatee beard. He has light pink and gold headset with a large yellow earpiece over his eyes, similar to that used for virtual reality. He wears a light blue shirt with a ruby red stripe across the chest, tucked into his dark indigo skinny cargo pants. The pants have a pink belt, hip pack, and trim around a frontal pocket. He also wears a ruby red cropped jacket, worn with the collar popped and the sleeves pushed to the elbows. A pair of thick gold straps that cross in the back are worn atop the jacket. His shoes are simple black combat boots. He accessorizes with a few gold pendant necklaces, a gold cuff on the right wrist, and a black and gold wrist watch over his bright green fingerless glove. The dancer has a light blue outline that fades around his shoes.

This section is a stub. You can help by adding to it.
The background has a neon triangle, grid, and space themed lights similar to Let’s Groove. Inside the triangle is a retro sunset. Along the grid are pink mountains.

Gold Move 1: Spin while jumping in the air.
Gold Move 2: Slowly put your arms while putting your left leg up. 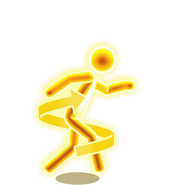 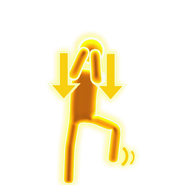 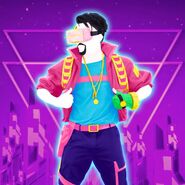 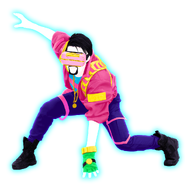 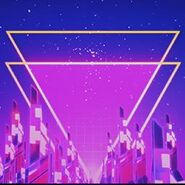 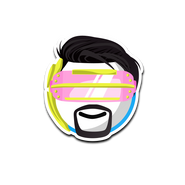 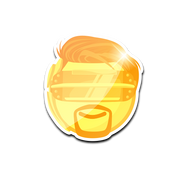 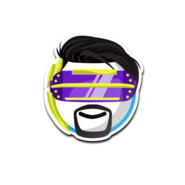 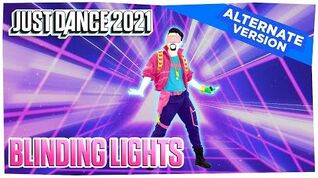 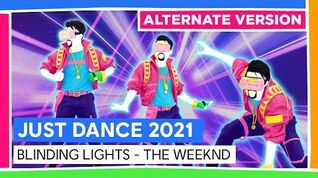 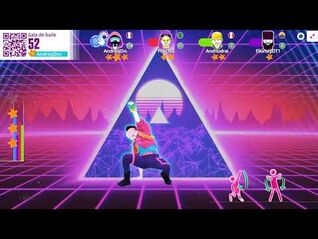 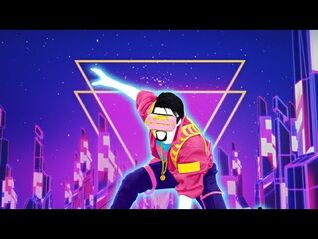