Blood On the Dance Floor

Blood on the Dance Floor: HIStory in the Mix

The dancer is Michael Jackson from the music video. He is wearing a red shirt, a red jacket, red pants, and black shoes. He is animated and has lighter-colored skin on the iOS, PSVita, and 3DS versions.

The dancer is a hologram in which the player appears. This is accompanied by two identical backup dancers who wear black pants, black shoes, and a white shirt underneath a black leather jacket.

The background is a stage with set pieces in the background that resemble the music video. Tables and chairs can be seen, with two triangular fixtures containing white balls seen on either side of the dancers. A large swirly design with a pink heart in the middle can be seen above the dancers. During the routine, the stage lights up various colors, including red, blue, and black.

The background is the club from the music video. The dancer appears on the stage in the center of the club, and tables can be seen around the stage. The camera angle changes throughout the routine, allowing different parts of the room to be seen. At some points of the routine, people appear in the club with some dancing on tables.

All Gold Moves: Put your left hand on your crotch and put your right hand to your side.

Blood On the Dance Floor on the Michael Jackson: The Experience menu (PS3) 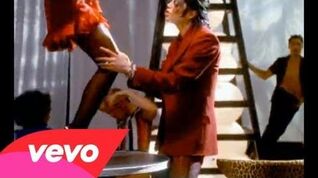 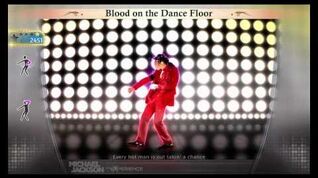 Blood On the Dance Floor - Michael Jackson The Experience (PS3) 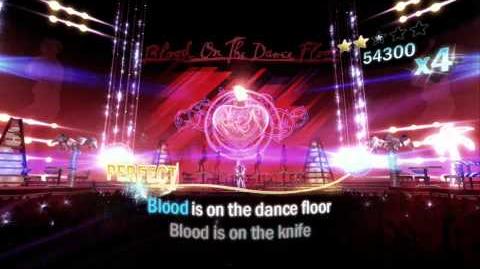 Blood On the Dance Floor - Michael Jackson The Experience (Xbox 360) 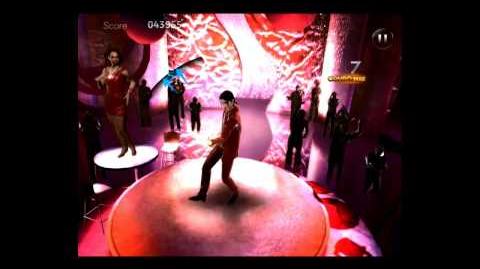 Blood On the Dance Floor - Michael Jackson The Experience (iPad)

Retrieved from "https://justdance.fandom.com/wiki/Blood_On_the_Dance_Floor?oldid=1359881"
Community content is available under CC-BY-SA unless otherwise noted.