The lead dancer is a boy with short black hair. He wears a light grey shirt with a navy blue tie, black pants, and black sneakers.

The left backup dancer is a boy with short brown hair. He wears a bordeaux collared shirt, a white and black vest, black pants, and black boots.

The right backup dancer is a boy with buzz cut hair. he wears a striped maroon shirt, a black leather vest, black pants, and black boots.

The dancers are on a stage in front of a community-style pool set outside. Moving across the sky are clouds and what appear to be the smokestacks of factories or steamboats, along with the silhouettes of an airplane and a flock of birds. Prior to the bridge, the sky is orange. When it becomes night at the bridge, many blinking stars appear throughout it.

The beige-colored stage is lined with several white lights that scroll during the verses and light up together during the choruses and bridge. It also has two speakers at either side which pulse to the music. Surrounding all sides of the pool are reclined seats, large potted plants, and tables with vases and bowls. These are shaded by a canopy with red panels that light up to the music and a backdrop depicting buildings in a cityscape view. In between these backdrops are columns of foliage.

Gold Move: Point towards the screen and lower your hand. 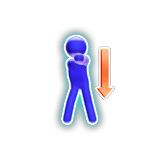 Burnin’ Up on the Just Dance Kids 2 menu (Wii) 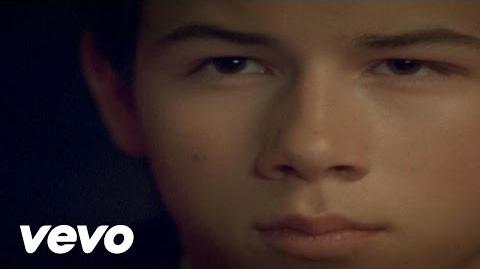 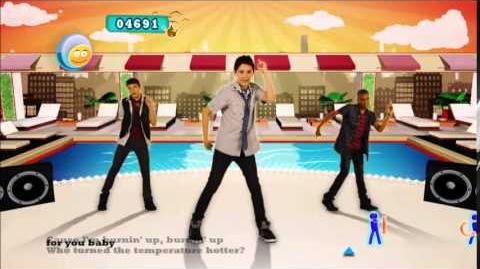