P1 is the panda (P2) from C'mon. The bandages tied around his left leg and right hand (which serves as his glove) are now blue, and his dollar-sign necklace is now purple. His fur also seems to be whiter. However, his light pink headband tied around his head and gray sleeveless jean jacket remain unchanged. 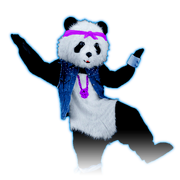 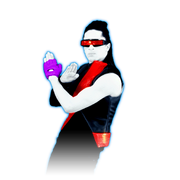 The background is the dress-up party with the dance floor. Notable items are a chair with a pillow on it, a mat and a shaped table, and the crowd is frozen while dancing in place. This background originally appeared in the first part of the verses.

The background consists of the crazy forward coming square lights. Although this background originally appeared during the instrumental before the chorus, the lights are now purple.

When C'Mon is chosen

C'mon wins: P1 whips out and presses a button that deactivates P2. P2 turns translucent, blue and then falters.

#thatPOWER wins: P1 jumps out of the screen, unprovoked. P2 simply looks off at the direction where P1 jumped off. 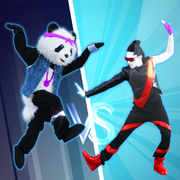 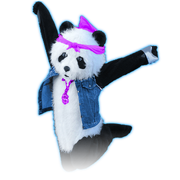 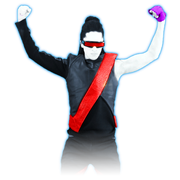 Retrieved from "https://justdance.fandom.com/wiki/C’mon_VS._ThatPOWER?oldid=1361492"
Community content is available under CC-BY-SA unless otherwise noted.