The song has an alternate routine titled "Contemporary Dance Version" which can be unlocked by playing the Classic routine 3 times.

The dancer is an animated woman with pink skin, visible facial features, and dark pink tied hair. She wears a pink cropped long-sleeved sweater, pink undergarments and pink gartered leg warmers, where darker and aged parts in her outfit is in a darker tone while the faded parts in her outfit is in a lighter tone. Her body is covered with neon paint in orange and yellow, and her body has a faint red glow. Her glove is also glowing and is colored sky blue.

Similar to the song’s music video, the routine takes place in a grimy, deserted house. As the coach walks through the house throughout the routine, she fills the house with splatters of color.

The routine starts with a cutscene which is a tracking shot through the different rooms of the house. At the first room, the coach can be seen sitting on a window sill with the window's shutters being open. A desk chair be seen next to the window sill and "CHANDELIER" can be seen written on the wall in ink handwriting.

In the following scene, the coach is in the hallway of the house. There are three rooms with wood doors and a coffered ceiling. At the end of the hallway, there are wooden frames of pictures wide window left open, bringing light into the hallway. An electric socket can be seen on the wall across the way of the room where the coach can remain seen at. Next to the socket, Light can also be seen on the wall with the light entering from the transparent window the coach is on.

After the hallway scene, the background moves to a close-up of outside the room where the coach is at, showing a bit more furniture from inside the room. A maroon camelback sofa can be seen to the left of the window. Dry raindrops can be seen on the windowpane. As the camera keeps moving slowly, the coach abruptly glows up.

Thereafter, the camera goes back to the hallway with the coach leaving the room and entering the hallway, finishing the cutscene and officially starting the routine. Glow in changing colors from the coach’s feet can be seen wherever she steps. The coach then goes back to the room from the first frame of the routine but from a wide camera angle and further from the wall. After this, the coach moves into a whole new room with a wider window with brighter light coming from outside, a wooden rocking chair facing in front of the window and two big bookshelves placed next to the wall.

When the first chorus begins, the coach moves to a room with a 3-panel windowed door to the right, a red parquet flooring and a red carpet. The coach dances at the entrance of the door during the first chorus. Every time the coach spins her arm aggressively as Sia sings, the carpet fills up with spots of abstract color. When the coach "trips" into the room, the room changes into a room with two doors, black wall, a rounded interior glass door, and two black chandeliers on the ceiling. The room is also filled with black rocks and grime dirt. As the coach swings herself from side to side, the room gets filled with more smudges of multiple colors. The camera angles change as the coach moves back and forth with the choreography.

As the dancer leaves the room, she enters a new area which is not a shown part of the house. This area has a bunch of open doors surrounding the room, a vented ceiling which brings lots of light into the place where the coach dances at, a bunch of thrown chairs and other furniture, and black pipes. As the coach is dancing, every time "holding on for tonight is sung" the coach fills up the area with more stains of colors. Most of the color is spilled on the chairs and pipes next to the door from which the coach entered. When the background zooms out, a framed picture and a cabinet with drawers can be seen.

After Gold Move 1, the background changes into a bunch of walls made out of stone and sandy floor, with light coming from behind the coach. The coach once again, fills a specific area of the walls with colors every time she steps on a certain area and when she's performing a move with her right hand. During the pre-chorus, it is revealed that there is a duplicate of the coach in between every two walls. Whenever the coach bends when "drink" is sung, a spot of color appears on the ground. When "Throw 'em back 'til I lose count" is sung, the coach fills up all the walls with a very big amount of colors.

After Gold Move 2, the background changes into an area looking a bit similar to the area from the second verse. The color spilled by the coach the line before remains on this background but on a different wall. The sandy area changes into a sand with grime dirt just like in the first post-chorus. To the left of the screen, a bunch of thin hopper windows can be seen with their bars completely destroyed. There are also three barrels that can be seen next to the windows and a bit of raw materials from behind the coach. Just like the chorus before, every time the coach spins her arm aggressively, the grime fills up with spots of color.

The camera swings aggressively along with the coach whenever she swings from side to side, which transitions to the next background. The background takes place at an area which somewhat reminds a parking lot. It shows a recently done flooring with materials such as bricks and cement with a bunch of heavy stones from behind. Fences of a higher floor than the floor the coach performs at appear to be broken. A few poles of stuff that is recently done in the parking lot can also seen from behind the coach. When the camera tilts to the right, a darker side of the parking lot can be seen flickering in pink and cyan glow.

When the camera zooms into the coach's faces, the background changes into one last area. That area resembles an abandoned building with not lots of things happening in it. The coach is dancing right in the middle of a centered area which is full of spots and paintings resembling the ones the coach spilled throughout the routine. The circular area is surrounded by stones glowing in multiple colors. A bunch of parts in the the area, such a small parts covering the edges of the centered area and floors higher than the ones the coach is dancing at are full with leaves and vines.

The routine properly ends with a frame of the first background of the house’ room shown but in a colored version and without the coach sitting on the window sill.

Gold Move 1: While facing to your right, open your legs, bend your knees slightly and put your right hand near your face.
Gold Move 2: Turn slightly to your left, put your left leg to the front and move your arms in a circular motion from your back to your head. 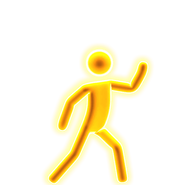 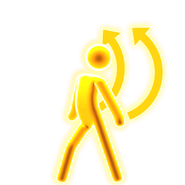 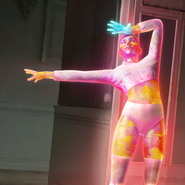 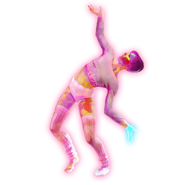 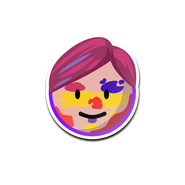 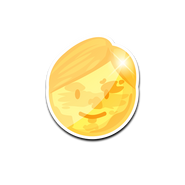 Chandelier on the Just Dance 2022 menu 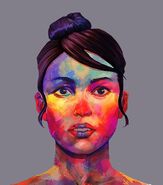 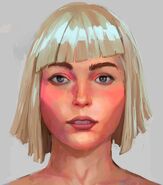 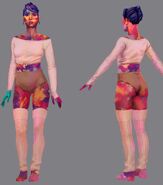 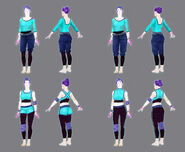 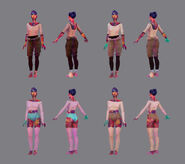 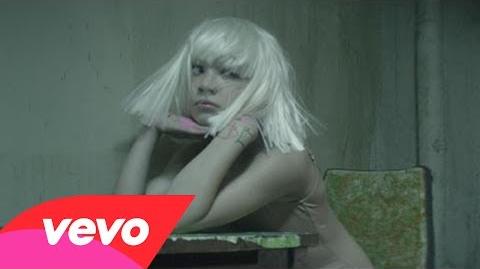 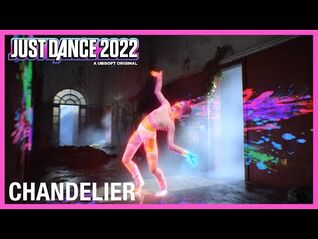 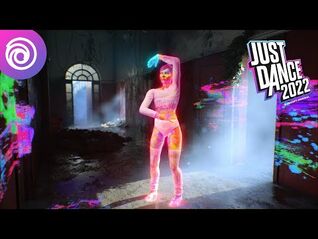 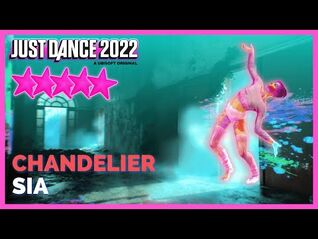