ChaseTheChance
"Chase The Chance" by Namie Amuro was supposed to be featured on Just Dance Wii U, but was later scrapped due to unknown reasons.

The dancer is a woman with long black hair. She wears a violet sleeveless open jacket and a purple crop tube top with black lines designed like a bra. She also wears black waist-high short shorts, dark purple ankle socks and black high heel booties. Her accessories includes a golden necklace and gold and dark violet bracelets on her left wrist. She has a pink outline.

From what can be seen from the leaked game footage, the routine was going to be set in a dark room with blue and pink spotlights shining from behind the dancer, as well as a faint reflective floor and faint purple cloud-like lights on the floor. Sometimes, bright blue lights appear with the spotlights and around the dancer. At some part of the choreography, a floating digital screen made of separate rectangular screens is seen, depicting an abstract background made of geometric shapes in magenta and light green as well as short grasses and blue sky. Behind the floating screen are also some faint blue arch-like designs. 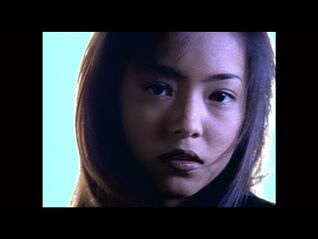