"床边故事 (Chuang Bian Gu Shi)" by Jay Chou planned to be featured on 舞力全开2017, however, it was removed before the launch of the game.[1]

The routine is a dance crew of two men and two women in card and circus themed outfit. All of the gold parts of their outfit are made with shiny sequins. They all have cream colored outlines.

P1 is a woman with medium length wavy black hair. She wears a purple top hat, which has sky blue, orange and gold rectangular strips attached. She also wears a purple turtleneck long sleeve leotard with orange accents and an orange legging on her left leg. An orange and black corset-like clothing with golden lines is attached on the left side of the leotard, supported by a black belt attached to the corset. There is a black half-cape on the back of her left leg, attached straight to the corset. She wears black ankle-length platform boots.

P2 is a man with short combed black hair with a small sky blue and orange tin hat resting on his head. He wears a rigid full body suit, with the top part, loose sleeves, and parts of the lower suit colored sky blue. The sleeves contain triangular patterns in black, gold and orange. He has a yellow suspender-like accent on the front, which has gold and orange diamonds. An orange rectangular shape is placed from the left side of his abdomen to right side of his thigh. At the end of his suit, the leg sleeves were uneven (one short and the other long) and there were orange accents. He also has sky blue socks with black triangular shapes on the side of the legs and yellow shoes.

P3 is a woman with black tied in a bun. Her head contains three cards with hearts, with each having a different color (sky blue card with orange heart, orange card with black heart, and black card with orange heart. She wears an orange leotard with open cleavage and the top part of her neck and arms exposed. She has a black accent on the cleavage as well as on a small part of her leotard. Sky blue lines intersect together with golden lines with black hearts across her chest, with the sky blue lines containing golden rectangular accents. The right sleeve of her leotard is black. Her skirt is stiff and styled like a card, which is divided into three parts: the left side orange with a large yellow heart, the center gold with multiple smaller black hearts, and the right side black with a large orange heart. She also wears orange tights with one legging containing three black hearts. Her high heeled wedges are also connected to the leggings.

P4 is a man. His head is covered by an orange and purple night cap with an orange fuzzy ball at the tip. He wears a large loose top styled like a jester's top, with the separate cuffs in purple and yellow stripes. The base of his top is orange, with the left sleeve having a purple accent and the right sleeve purple with an orange accent. Three sky blue banner-like attachments were placed in front of his top, with two placed under the cuffs, and they contain purple, gold, and orange diamonds. The end part of his top has purple and gold accents. He also wears a pair of orange and purple baggy split colored shorts and purple and orange mismatched shoes. 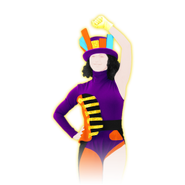 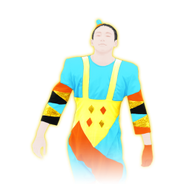 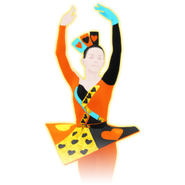 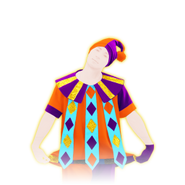 Based on the menu square, the background appears to be a forest at night with mushroom buildings on the right and blue markings on the ground. 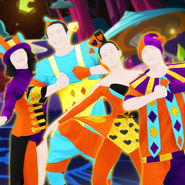 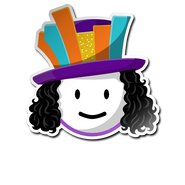 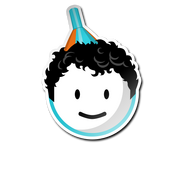 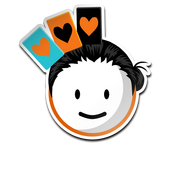 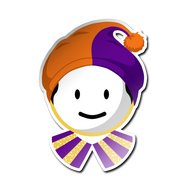 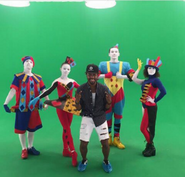 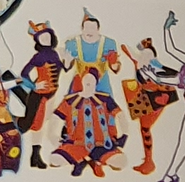 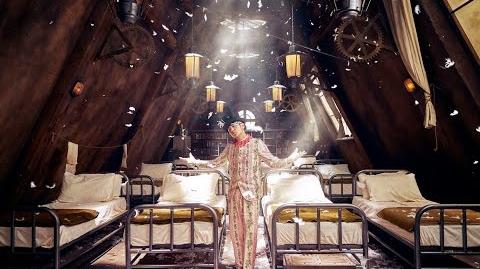