Julia Spiesser[citation needed]
"Cosmic Girl" by Jamiroquai is featured on Just Dance 2, Just Dance 3 (as a downloadable track exclusive to the Xbox 360), Just Dance: Best Of, Just Dance Now, Just Dance Unlimited, and 舞力无限. It was also planned to be on Just Dance: Greatest Hits, but it was scrapped for unknown reasons.

The dancer is a female who is dressed like a superhero. She has curly blonde hair. She wears a yellow and pink super hero outfit, a pink mask, and a pair of neon green boots with cyan lines.

The dancer retains the same style but with a HD flick and like Move Your Feet’s remake, she also has a black outline. 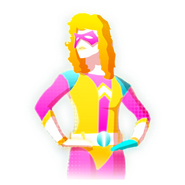 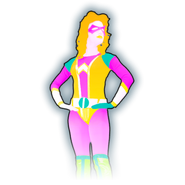 The background has a dark green reflective floor; behind it, a comic-like space scene can be seen. It features white, rocky terrain with yellow shadows, the Earth (with a slight dotted comic paper effect and a light shade around its thin, black outline) and a dark green-bluish sky that gradually fades to green-yellow at the bottom, with some planets and blinking stars.

As soon as the song starts, the song title is displayed in caps letter by letter, with a thick font that has a drawn 3D effect and two stars that appear on the sides right after the letters. The font color is initially pink, and then it suddenly turns yellow before gradually fading to white; in the meanwhile, a white trail of stars with a pink shade on the sides flies around the screen, until it falls on the floor along with the coach herself, a cracking animation and a white "POW!" in a cartoony font on the right. As soon as the intro ends, the trail dissolves into many white stars, and pink-reddish smoke comes out of the coach’s feet.

During each verse, two rows of asteroids fly from the right, and the coach crushes them with her hand, alternatively emitting the onomatopoeia "BOOM!!" and "BAM!". They are both white but in different fonts, with the former resembling the intro title and the latter using the same font as "POW!"; besides, the former word appears for the top row of asteroids, and the latter for the bottom row. After the asteroids are destroyed, their pieces fade away. After that, the coach exudes a greenish aura and produces a laser-like matter that comes out of her hands, accompanied by the word "FIIIIIIIIIIZZ!!" stretching out and fading away along with the beams.

During each chorus, greenish circular rays and green dots that disappear at different intervals are quickly emanated around the Earth when the coach moves her arms in two semicircles; then, when she throws her right arm out, "POW!" pops up quickly along with white cartoony rays, succeeded by "SLASH!" sliding back and forth towards the arm.

At the end of the routine, the coach jumps and launches herself into the air; by doing so, she turns pink and releases the word "DASH!!!" below her, along with pink smoke.

In Just Dance 3, the background is designed like a comic book, with the original one being placed in the middle frame. This frame is yellowish and slightly crooked, revealing three other scenes above. There is also some black fade on the corners of the screen.

The original background itself has also received changes, with the sky being pitch black and starrier, the planets being more saturated, the Earth having a more visible comic paper effect and the terrain being yellow with brown shades. The dancer now stands on the terrain, and green rays occasionally shoot out of the Earth with a different design and effect from the one seen in the original version.

In Just Dance: Best Of, the background is more based off the original one; however, the sky is darker and applies a much more visible comic paper effect on everything except the terrain, as it fades down starting from the top; besides, the green circle that flash around the Earth during each chorus are in fewer quantity and fade away earlier.

The entire background is updated into high-definition and made brighter. It highly resembles the Just Dance 2 version, but the floor is more reflective, and the shadows on the corner are less stark, making the contrast between the shades in the sky more visible; furthermore, the comic paper effect uses more sets of dots overlapping each other, and the stars are smaller and in a different design. As the coach now has a solid black outline and the asteroids, the onomatopoeia and the laser beams are part of her extraction in the game files, those elements are outlined, too. When the coach throws her arms out, "POW!" pops up with a slightly different animation.

Gold Move: Put your hands on the side of your head. 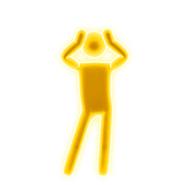 Cosmic Girl appears in Puppet/Party Master Modes. Here are the captions attributed to her dance moves:

Cosmic Girl is featured in the following playlists: 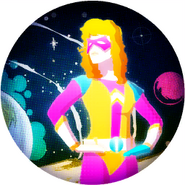 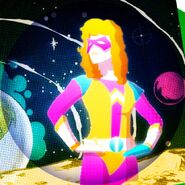 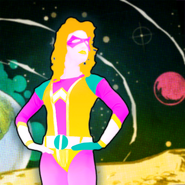 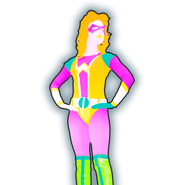 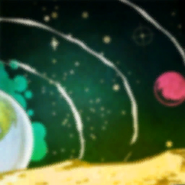 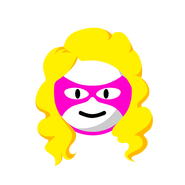 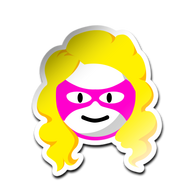 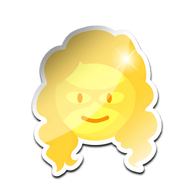 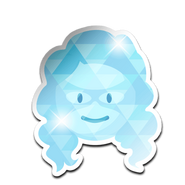 Cosmic Girl on the Just Dance: Best Of menu 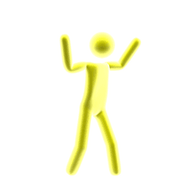 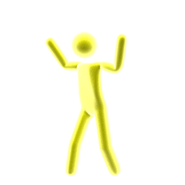 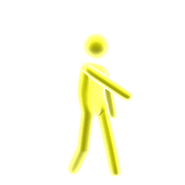 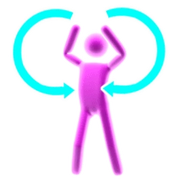 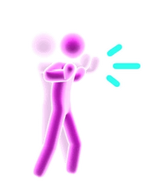 The coach on the icon for the Just Dance Now playlist "Wacky Coaches" (along with Miłość w Zakopanem, OMG (P2), Boogiesaurus, and Bassa Sababa)

The coach and part of the background on the icon for the Just Dance Now playlist "Galactic Groove!" (along with Satellite and Blinding Lights (Extreme Version)) 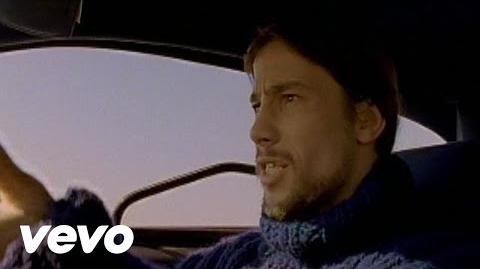 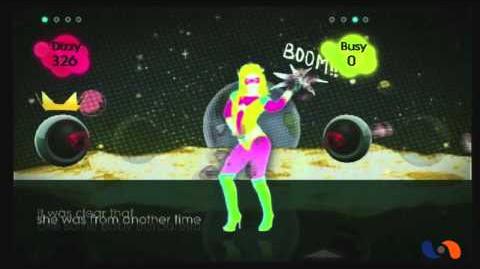 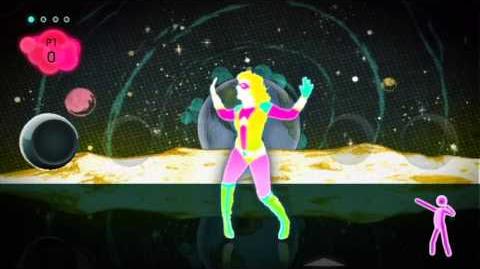 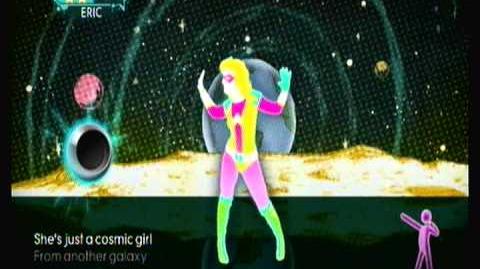 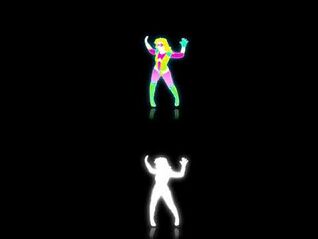