JDCCowboysBusy
牛仔很忙 (Niu Zai Hen Mang) (also known as "Cowboy's Busy") by Jay Chou (周杰伦) was planned to be on 舞力全开：活力派 but was never released into the game before the shutdown of the game.

The routine is performed by a woman and a man. They are dressed like cowboys.

P1 has a sky blue cowboy hat and long black hair. She is wearing a red t-shirt and a pair of denim blue shorts overalls with only the left strap on. She has a half red/half orange cloth belt, a yellow bracelet on her left wrist and heeled leather boots. Her glove is purple.

P2 has a leather cowboy hat and black hair and beard. He wears a yellow sleeveless jacket over a red and orange checkered shirt with sky blue highlights. He wears a brown bracelet on his left wrist, jeans with the bottom rolled up, a black belt with a grey buckle and leather boots. His glove is sky blue. 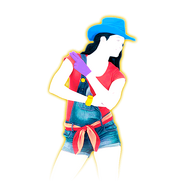 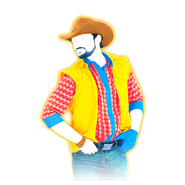 The background's color is aqua and contains certain objects like barstools, a diner sign, a car, a bottle of milk with a straw, some hay bales, and a merry-go-round horse. During the chorus, the background turns into a canyon, but the objects still remain the same like before.

Gold Moves 1, 2, and 3: Punch the air with your right arm, moving it to the left in a semicircular motion while holding the right elbow with your left hand.
Gold Move 4: While holding their hat with their left hand, P1 points down and P2 points up. This is the final move of the routine. 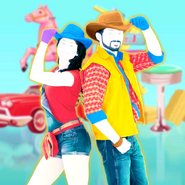 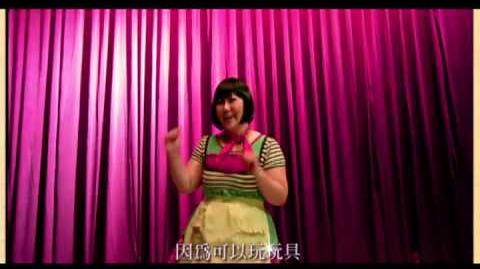 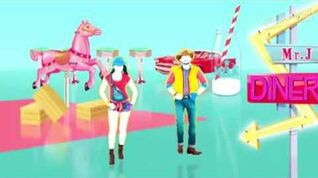