"Crazy Kids" by Ke$ha featuring will.i.am is a routine that was created as part of a Just Dance Creativity Workshop during the development of Just Dance 2015.[1] The video file was found on the Autodance servers, suggesting the possibility of inclusion in the game was considered at one point.[2]

The dancer is a woman. Throughout the routine she covers herself in paint consisting of the colors green, purple, and red.

Appearance in a promotional video 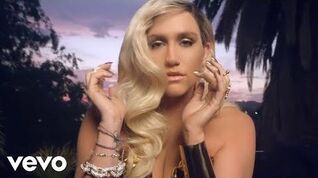