< Dharma
View source
watch 02:58
No Man's Sky Update - The Loop
Do you like this video?
Play Sound

1A: Chathams Blue
1B: Midnight
2A: Mimosa
2B: Bright Dell

P1 is wearing a red sunhat with a red strap and a opening at the top where his black hair, done in a man bun, can be seen. he wears a red tangzhuang suit with green sleeves and with a black vest with a green strap around it and different colored tassels on the bottom. His shoes are black.

P2 is wearing a blue-and-black robe with a pink stripe separating the colors. He has pink and green wristbands. He is also wearing a pair of black shoes with black high socks and a blue ribbon wrapped around both legs. 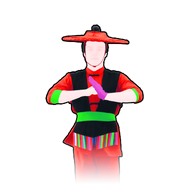 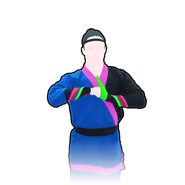 The routine takes place high up in the mountains. The dancers appear to be standing on a golden circular floating platform which appears to have a rooster imprinted, then changes into the Yin Yang symbol in some parts of the song.

At the beginning of the routine, Chinese architecture can be seen floating on a grass platform. A waterfall and some trees can be seen. Three broken bridges are seen leading away from the platform. The wind leaves a trail of leaves circling around the dancers.

Next, as the platform is seen panning up higher into the clouds, more floating architecture is shown and an ancient palace appears. The trail of leaves flies to the door of the palace. A slightly faded rainbow can also be seen over the palace. The front of a similar golden palace is shown as the platform pans up into it, with golden rays shining behind the structure.

Then, in the electronic portions of the song, the dancers go into a straight sky in shades of blue, where two-dimensional neon architectures can be seen. Sparkles of light and rays go along into the straight sky.

In two parts, the background is then set in sunset, as the sun is seen with a tree branch and clouds, tinted in sunset orange.

Gold Moves 1 and 3: Put your right foot on your left knee and grab your right leg.
Gold Move 2: This is a right-to-left Wave Gold Move:

Dharma (Fight Version) is featured in the following playlists: 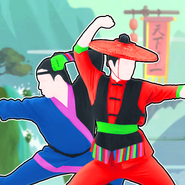 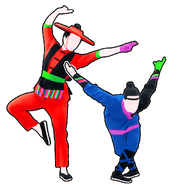 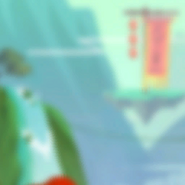 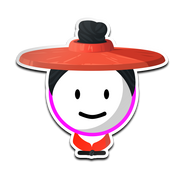 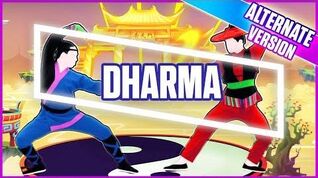 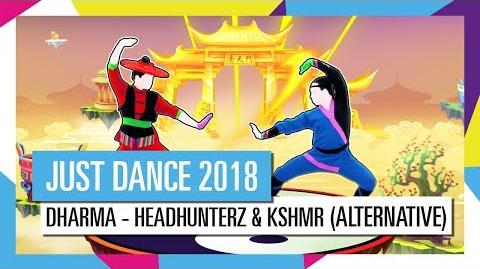 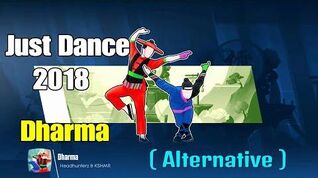 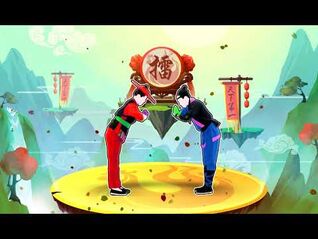