< Don’t Go Yet
View source
watch 02:34
Fire Emblem Warriors: Three Hopes - The Loop
Do you like this video?
Play Sound

Camila Cabello
"Don’t Go Yet" (Alternate Version) is featured on Just Dance 2022, where the routine can be played with an internet connection. It is also featured on 舞力无限.

The dancer is Camila Cabello, wearing the outfit that she wears in the choreography tutorial video for the Classic routine. She is a woman with dark hair tied neatly to the back in two thin long braids that reaches to her hips, and has frizzy and curly fringes on the front portion of her hair. The braids are tied together by a yellow hairband on the base of the braids.

Her outfit consists of a red wrap that comes from her lower back and moves up to cover her breasts, with a dark brown rope-like segment that loops on her neck and are crossed together, while making an ovoid-shaped cleavage. The segment is also tied into a ribbon-shaped tie on the back, where two long loose and hanging strands with cylinder-shaped metallic bits attached on them. On her waist is a black cloth band, which is used as the garter for her frilled and two-layered skirt, which leaves much of the front and sides bare. The skirt is black in the outside and is decorated with red and yellow flower patterns, while the inside portions are cream yellow. She also wears a pair of black strapped heels. She also wears a pair of golden circular earrings with a small circular base and a pair of elbow-length gloves, with the left glove black and the right glove red.

The routine takes place in a blue room with checkered floor. There is a wall light on each side. They are each surrouned with a circle and two rhombuses. The one on the right has a blue rhombus and a brown circle while the right one has a red rhombus and a pink circle. Next to the right light, on the floor, there is a retro phone standing. On the far-left side of the room, there is a small white column with a vase of various flowers on it. The same set was used in the choreography tutorial video for the Classic routine.

Gold Move 1: While slightly bending your knees, put your arms in front of your chest with your elbows bent and the palms of your hands facing each other.
Gold Move 2: With your right leg spread 45°, throw your arms down immediately.
Gold Move 3: With your left hip bent towards the left side, put your right arm down in a semicircular motion, so that the palm of your hand faces the ground. 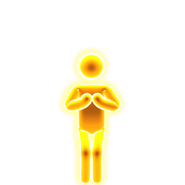 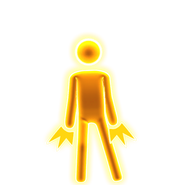 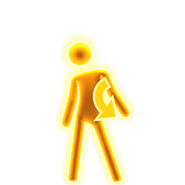 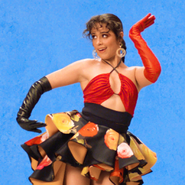 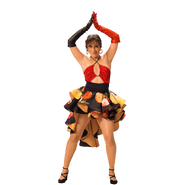 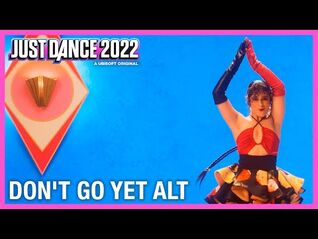 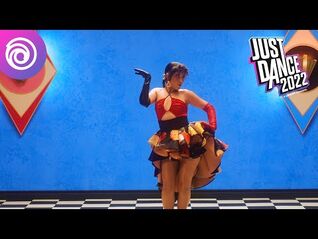 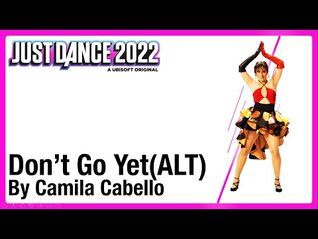