The dancer is a girl resembling Violetta. Her chocolate brown hair is tied in a ponytail that loops around her right side and rests on her shoulder. She is wearing a pink-white dress with a red rope-like belt. She also sports maroon knee-length leggings. Her footwear includes shiny gold shoes.

The background is a flying checkered dance floor. Random tiles on the floor flash hues of pink. There are also white and purple speakers at the back with purple beat marks coming out of them. Around the speakers are faint purple stars and music notes appearing spontaneously. It appears to be morning, as there is a purple sky with pink clouds. At the start of the first post-chorus, the color scheme changes; the tiles flip over and now flash a bright purple. In addition to the stars and music notes (which are now white and bright purple), tiny yellow jewels dot the skies. The time appears to be afternoon, as the skies are now blue with purple clouds. Before the second verse, white sequins zoom and make a pattern to spell out the letter "V" in the show's signature form. The end of the routine is signified when the camera zooms in to the speaker in the middle.

There are also two backup dancers performing beside the main coach. One of them, who resembles Leon, is a male with slick black hair and a black t-shirt. He also sports a pair of red jeans and black sneakers. The other one, who resembles Ludmila, has dirty blond wavy hair that settles on her shoulders. She wears a bordeaux maroon top with a yellow rope-like belt around the torso. She also wears blue skinny jeans and bright red sneakers.

Gold Move: Bend your arms and put both hands on your chest, then bring them down quickly. 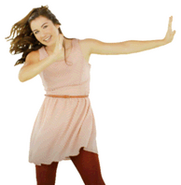 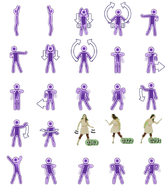 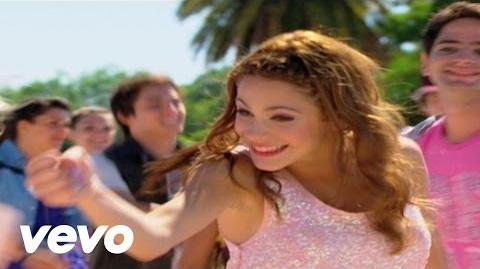 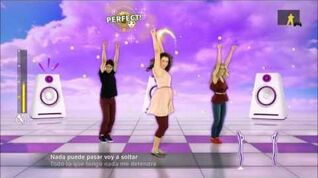 Retrieved from "https://justdance.fandom.com/wiki/En_Mi_Mundo?oldid=1372315"
Community content is available under CC-BY-SA unless otherwise noted.