The coach is a woman who resembles Maleficent. Her blonde hair is tied up into a bun. She wears a black overcoat with a high black collar. The overcoat is buckled over a blue blouse. She also wears black pants and matching black boots. She has a gray stone staff with a blue gem at the top which she uses as a dancing cane.

Throughout the entire routine, the coach is accompanied by a backup dancer who appears to resemble Mal, who has purple hair. She is wearing a magenta jacket with hot pink and brick red sleeves. On her left hand, she sports a black glove. She also wears a pair of purple jeans with tears at the knees and a pair of plum colored boots.

The background takes place in a dark room that resembles the Museum of Cultural History. On the floor are glowing purple and black spikes. There is a pedestal with a stone statue in the middle. On the opposite sides of the room, there are two stone statues of veiled women. There are also two lines of circular columns. Above everything, the columns form round arches. Above the dancers’ heads are spotlights: one purple spotlight shines on the coach during the verses, two blue and green spotlights light up the sides during the first and second choruses, and for the rest of the routine all three spotlights join in to shine the entire room.

There is 1 Gold Move in this routine:
Gold Move: Raise both your arms with clenched fists as if you were holding a long stick and kick your right leg.

Evil Like Me on the Just Dance: Disney Party 2 menu 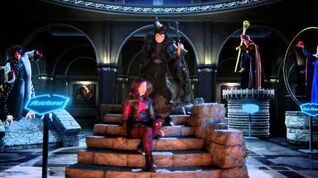 Just Dance Disney Party 2 – Descendants - Evil Like Me - Official US 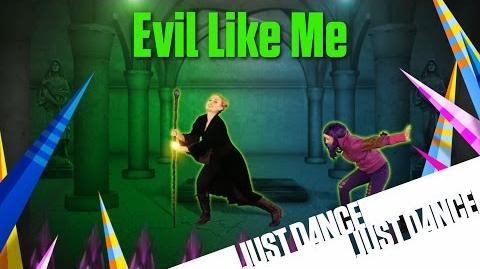 Retrieved from "https://justdance.fandom.com/wiki/Evil_Like_Me?oldid=1087955"
Community content is available under CC-BY-SA unless otherwise noted.