"Falling For Ya" by Jordan Fisher and Chrissie Fit from Teen Beach 2 is featured on Just Dance: Disney Party 2.

P1 is a woman with a grey leather vest. The vest is unzipped, and reveals a black shirt. The dancer also has a red flower in her flowing black hair, and her hair goes past her chest. She sports a pair of black cargo shorts secured with a black belt. Her footwear includes black boots, with silver stitching at the top. She resembles CheeChee.

P2 is a man whose black poofy hair is done in an afro. He wears a white sweatshirt with gray square designs all around the front. He also wears with gray polka dotted cargo shorts. On his feet are white socks under gray sneakers. He resembles Seacat.

The start of the routine is featured in a dark room with P1 under a yellow spotlight in the middle. When P2 sneaks in, the room lights up.

When the room is lit up, The room is revealed to be a stage in Big Momma’s with blue and yellow matching lanterns hanging from above. There is an old jukebox on the right, which flicker blue and yellow, corresponding to the color of two active spotlights. Behind the dancers are two small bamboo curtains in front of rainbow string lights that coil around two thick palm tree trunks, and a wide painting of an big blue ocean during sunrise covering the wall.

Gold Move: Sing into the microphone. 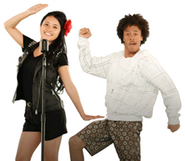 Falling For Ya on the Just Dance: Disney Party 2 menu 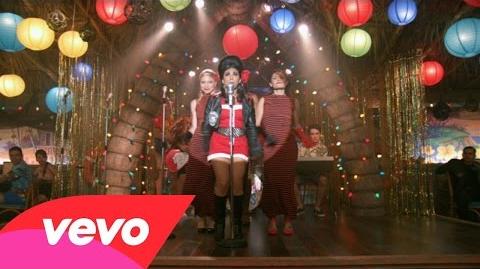 Jordan Fisher, Chrissie Fit - Falling for Ya (From "Teen Beach 2")

Retrieved from "https://justdance.fandom.com/wiki/Falling_For_Ya?oldid=1201673"
Community content is available under CC-BY-SA unless otherwise noted.