"Riding High" by Terry Devine-King[3][1] is featured on Just Dance 2021, Just Dance 2022, 舞力无限 as a part of Kids Mode, and Just Dance Now. In-game, the song is credited as "Get On The Fire Truck" and is attributed to The Step Brigade.

The coaches are a girl and a boy dressed in orange firefighter costumes with lime green and yellow stripes and black loafers. They both have thick black and white outlines

P1 has pink hair tied into two short braids. She wears a cyan firefighter hat with a lime green badge on it, two cyan stripes on the pants of her firefighter costume, and a cyan walkie-talkie placed on the chest of her costume. Her glove is blue.

P2 has short black hair. He wears a purple firefighter hat with a lime green badge on it, two purple stripes on the pants of his firefighter costume, and a purple walkie-talkie placed on the chest of his costume. His glove is red. 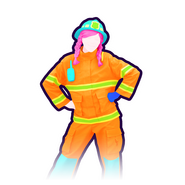 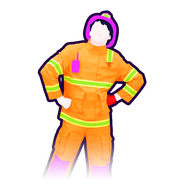 Most background assets use bold, slightly askew, black outlines and bright colors that get outside of the outlines, so as to resemble a child's drawing. The details are also relatively sparse with ample white space, reminiscent of the drawing being done on paper.

The map begins atop a fire station, with cyan poles the coaches descend, yellow bricks lining the wall, and alarm lights with spinning red lights and turquoise backing. At the ground floor, a sounding fire alarm bell with a turquoise base, yellow bell, and brown striker is seen along with the station's emblem (a red shield with a pointed upper center and a yellow symbol of a flame) and striped red-and-white caution tape for vehicles.

In front of the view of the ground floor (depicted as the coaches run in that direction) is the fire truck, primarily painted in dark red, with yellow highlights and dark grey metal elements, a yellow switch for a purple-floored platform with a white and yellow rim and a maroon backing, dark grey wheels, cyan-tinted windows, a yellow emergency light holder with red lights, a red megaphone with a small antenna, a star-shaped plating designating the truck as "1", and a hose with purple nozzles, a view of the cyan water inside, and a yellow plating designating the amount of water present in the hose (shown with cyan coloring that pulses dark blue when being accrued, though it is empty when initially shown).

As the truck disembarks, cyan clouds, turquoise trees, tall buildings (one set colored yellow having a laundry line attached to two of the buildings, and one uncolored set including an architectural arcade and arches on its ground floor) are seen. Fire is depicted as small embers with a center-based red-orange gradient and cartoony angry faces. As the hose fires on them, the faces are panicked as the narrow stream splatters, shown with tiny flecks and splotches in the outline. A remaining circular ember is shown being "eaten" away at by water afterward.

After two waves of fires are dealt with, the coaches disembark the truck, bringing out a burgundy life net (not used in modern firefighting in favor of trucks with an aerial apparatus, but an iconic element in fictional depictions that would be apt for a child to think of when drawing) in front of a tall building with a red door, yellow door frame, purple bricks, and windows painted cyan, yellow, and magenta. Cats falling from the building are saved by the net, bouncing off to alternating sides in groups of two. The first group consists of a grey cat with a white tail-end, center, front legs, and muzzle and an orange cat with a spotted face, white front legs, back paws, and tail-length. The second group consists of a sea blue tabby and another orange cat, this time with a white left side of the face and a ringed pattern for its tail. The third and fourth groups repeat these sets, with the third reversing the order from the first.

The coaches run towards the building and set up purple ladders to climb. As they do, further windows and bricks are shown, with some of the former being pink and turquoise. The roof is yellow with details of tiles and a chimney with a beige topper and brick details. Some clouds seen here are a darker blue with visible gaps that resemble being drawn incompletely with a crayon. After dealing with another group of embers, the 4 unique cats hop onto the roof, and a tritone rainbow made with jagged outlines and dark blue, light blue, and pink coloring is drawn in an arc. 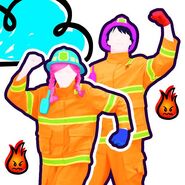 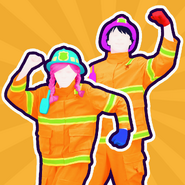 Get On The Fire Truck
(Kids Mode) 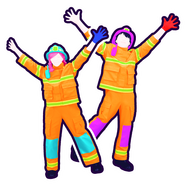 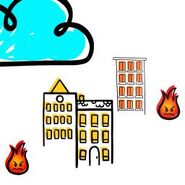 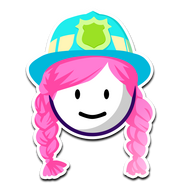 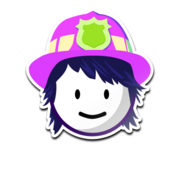 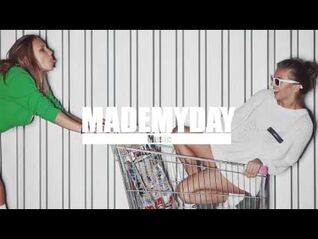 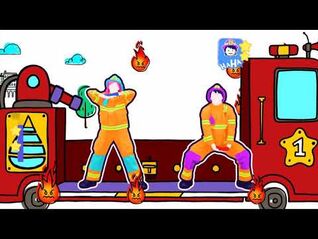