Just Dance Wiki
Register
Don't have an account?
Sign In
Advertisement
in: Songs, Songs by The Just Dance Band, 1940s,
and 5 more

"恭喜恭喜 (Gong Xi Gong Xi)" (also known as "Congratulations" and "Happiness To You"), composed by Chen Gexin and performed by The Just Dance Band, was available on 舞力无限 until February 18, 2022.

The routine is performed by a trio, a man, a girl, and woman. They resemble a Chinese family in Chinese fashion in colors of red and yellow.

P1 is the father, he has black hair with his bang swept to the right. He wears a red sweater with golden cords on his shoulders, a golden strap on the bottom of the sweater, and golden accents around the sweater. He wears black pants with red bands at the end of the pants. He wears orange socks with black shoes. He has a dark blue glove.

P2 is the daughter, she has black hair tied into pigtails which is tied by a blue and pink pom pom. She wears a hat that closely resembles a tiger, the hat is mostly red and gold and has blue and pink pom poms next to it, with blue, pink, and yellow pom poms dangling by a red string. She also wears a red sweater with golden accents and has a Chinese symbol on her sweater. She wears a red skirt with a golden frill. Her shoes are red flats with a strap and a flower on each tip, also there are black soles for her flats. She wears a dark purple glove.

P3 is the mother, she has black hair that is up to chest length. She wears the exact sweater just like P1. Her skirt is red and she wears red heel boots. Her glove is light blue. 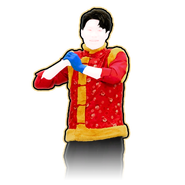 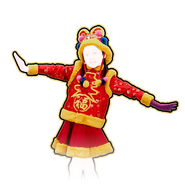 After the intro, the background changes to a scene of flowers and lights, with a rotating circle of eight tigers. After the first 'Gong Xi Gong Xi' part, the scene changes to a window view, where mountains, trees, a skyline, and fireworks can be seen. The following sequence consists of the previous backgrounds repeating until the bridge. 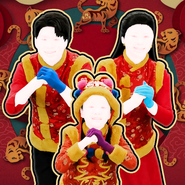 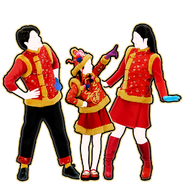 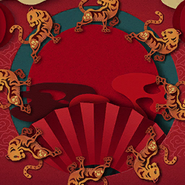 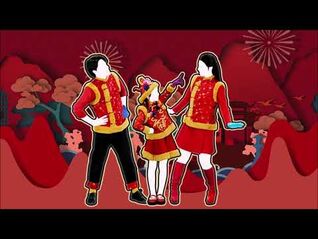 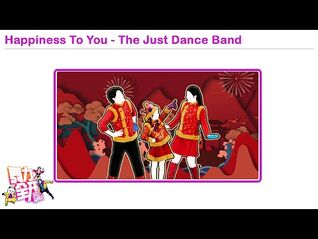