HotForMe
"Hot For Me" by A.K.A is featured on Just Dance 4. 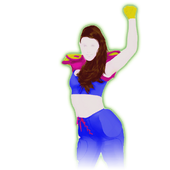 The dancer is a female football player with brown hair towards the right side of her face. Pink stripes can very faintly be seen painted on her cheeks. She wears an indigo blue sports bra with hot pink and yellow shoulder pads, indigo blue padded Capri pants, and hot pink and yellow sneakers. She appears with an animation that consists of white concentric circles that fall down and spread on the floor, as well as other black circles on her body that fade away and reveal her details. Many sparkles evaporate as soon as the circles fade away. At the end, the coach returns black and fades away.

The background is a dark football stadium with four black screens. When the coach stretches her arms out, two rectangles pop up behind her and fade away while stretching out. During several parts of the verses, the screens light up and display white and blue concentric circles spreading for a couple of seconds before fading back to black. The blue circles gradually fade from light blue to purple. Sparkle effects swirl around the coach at certain times.

In the pre-chorus, light blue rectangular spotlights that are placed behind the screen light up one after the other.

In the chorus, the stadium lights up, and it shows four shaded cheerleaders who copy the coach’s movements and fade away as soon as the chorus ends. The spotlights and the screens light up, and the latter display white and light blue arrows pointing towards the coach, which start to slide as soon as "Make it hot for me" is sung. Two white straight lines slide on the floor alternatively, depending on where the coach steps. Behind all these items, a gray tribune with flashing lights, guardrails that range from light blue to fuchsia, and four smaller copies of the spotlights can be seen. When the coach shakes her shoulders, she emits yellow and fuchsia particles; when she raises her arms up, white concentric circles rise from the ground; when she punches her hands on her chest, two white rectangles pop up and fade away immediately while stretching out. The screen zooms in diagonally every four beats.

As soon as the bridge starts, the background returns to darkness and red smoke spreads around the coaches. The cheerleaders remain instead of fading away. Six fires (four over the screens and two on the floor) light up and burn as soon as the singing starts, and confetti flies around the scenery. When the coach punches her arm while walking, the screens light up depending on the direction she is following. In the second part of the bridge, red balloons fly behind the screens.

The fires and the balloons remain during the final chorus; the latter fade away gradually, although they come in a wider range of colors. When the coach claps her hands, she creates white concentric circles. 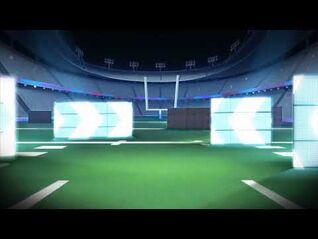 Hot For Me background - Just Dance 4

On the Xbox 360 version of Just Dance 4, the ground is much brighter, revealing several white lines and four shadows of the coach. In the chorus, the cheerleaders are less visible. In the bridge, the scenery is darker, there is less smoke and the balloons are red and gray in the bridge. In the final chorus, the balloons have different colors and do not fade away. Before Gold Move 3, the cheerleaders fade away one by one.

There are 3 Gold Moves in the routine, all of which are the same:

All Gold Moves: Put your hands up in the air and jump.

Hot For Me is featured in the following Mashup: 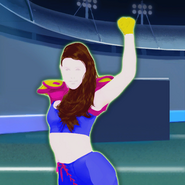 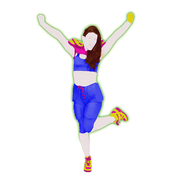 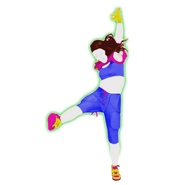 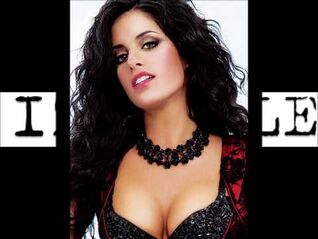 Find out who's behind the song "Hot for me" by A.K.A. featured on "Just dance 4" 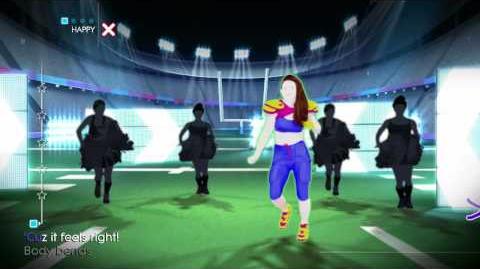 Hot For Me - Gameplay Teaser (US) 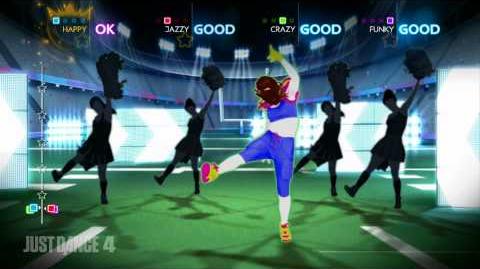 Hot For Me - Gameplay Teaser (UK) 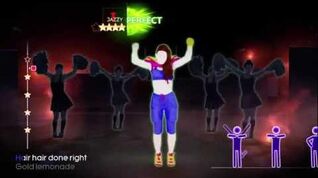 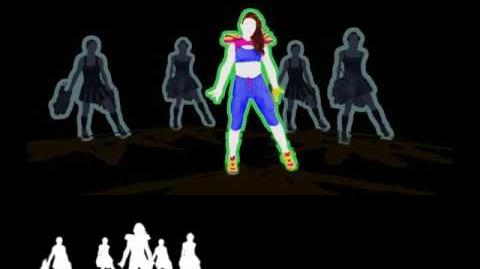 Hot For Me - Just Dance 4 Extraction