Isaiah Rashaad[citation needed]
"火锅爽 (Huo Guo Shuang)" (also known as "Hot Pot Cool") by Aya is featured on 舞力全开. It was planned to be featured on 舞力全开：活力派, but was never released before the shutdown of the game. Assets for the song can also be found in the files of 舞力无限.[1]

The routine is performed by a trio consisting of two women and one man. They have white and brown thin outlines.

P1 wears a green-and-pink polka-dotted full-body suit resembling an octopus tentacle. She wears a large pink-and-yellow lettuce as her headpiece. In addition, she wears a pair of pink flats.

P2 has black hair in a bob cut. She wears a pair of drop-shaped green sunglasses with red rectangles, a magenta shirt with a light green spotted tie, a spotted suit that is light green on the left and dark green on the right, magenta fluffy cuffs, a black belt and a pair of black and red heeled boots.

P3 wears a green-and-yellow polka-dotted full-body suit. He wears a pink cuttlefish helmet as his headpiece. He also wears a pair of yellow shoes. 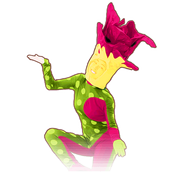 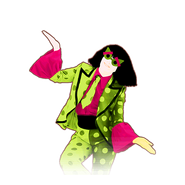 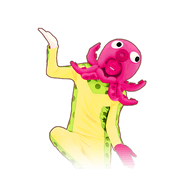 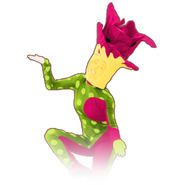 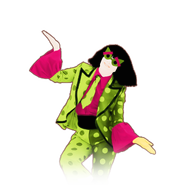 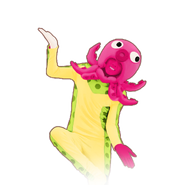 The routine takes place in front of a color-changing backdrop with a hot pot as its centerpiece. Food items such as mushrooms, fishcakes, shrimp, meatballs, lettuce, and red meat rotate on the backdrop. Bottles of soy sauce also spin out at one point, as do saucers of condiments.

Gold Move 3 (Gold Moves 2 and 3 on 舞力全开：活力派): Lift your right leg up in a 45° pose, and lower your hand towards your foot so that they almost make contact. 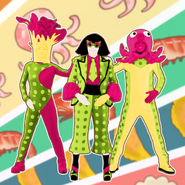 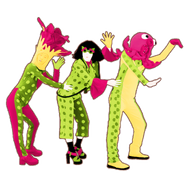 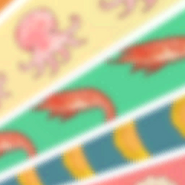 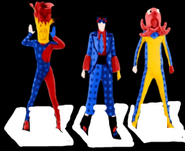 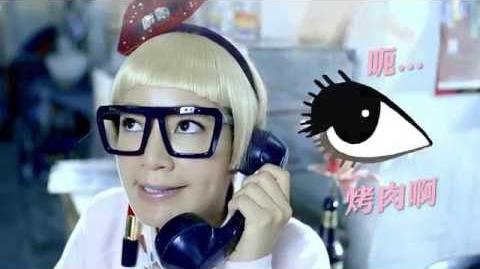 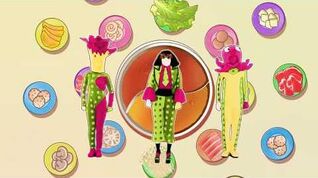 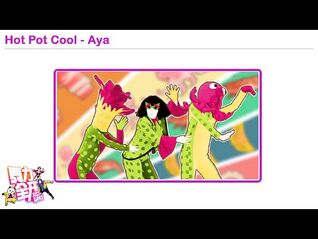