The dancer is a girl who appears to be dressed up as Haruka Shimazaki/Petunia, who is a member of NyaKB/Next HarMEOWny. She has brown bobbed hair, a pair of black and pink kitten ears, a golden crown with pink gems, a dress with pink shoulders and sleeves under a black and turquoise corset with yellow and white highlights a red, turquoise and white ribbon, a yellow-green glove, a red checkered skirt with black fringes and orange circles, black knee-high socks, and black shoes.

The background consists of a stage with hearts, raindrops, Pandanoko, Jibanyan, Komasan, Whisper, stars, swirls, and balls with stripes on them. Copies of the dancer also appear in the background.

Both Gold Moves: Bend over slightly, and pose your arms up front with your hands closed. 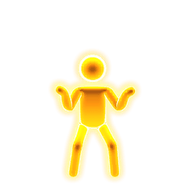 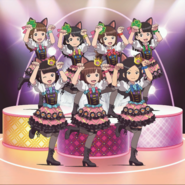 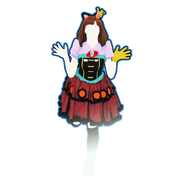 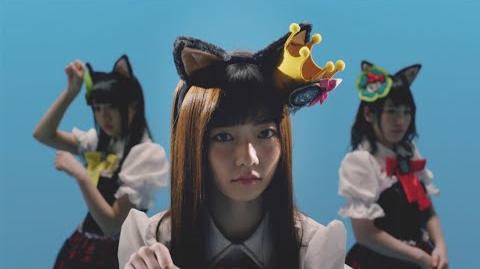