P1: Keko Marcos[1]
"酒歌 (Jiu Ge)" (also known as "Drinking Song") by Hanggai is featured on 舞力无限.[2] It was originally planned to be featured in 舞力全开：活力派, but it was never released before the shutdown of the game.

The coaches are a trio of men wearing traditional Inner Mongolian clothes.

P1 has a cowboy hat with a rhombus decoration, black beard with a little tuft, a half brown coat with red fur on the border and the end of the sleeve, a yellow shirt, blue and red kerchiefs with square decorations, a belt with the same pattern as the hat, blue pants, and black boots with orange and light blue flames.

P2 has a black and gold crown with a red gem on the top, black hair in a ponytail, a goatee on his chin, a half yellow coat with red fur, blue decorations on the border and a short sleeve, a cyan shirt, the same kerchiefs and the same belt as P1, red pants, and the same pair of boots.

P3 has long black hair, a black crown with golden swirls and a blue gem on the top, a pair of mustaches with a goatee, a half blue coat with orange fur, a red shirt, the same kerchiefs as P1 and P2 in orange and yellow colors, yellow pants, and the same boots as the two other coaches. 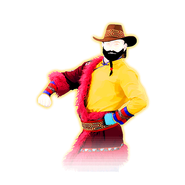 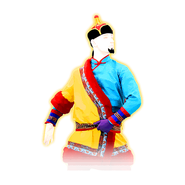 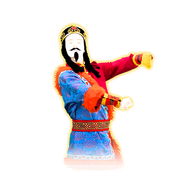 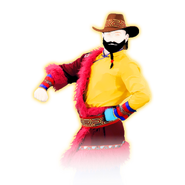 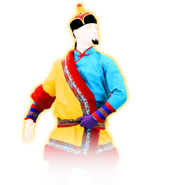 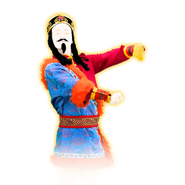 The routine takes place from daytime to dusk in an Inner Mongolian village. At the start of the routine, the camera pans right from a relatively clear portion of the village plains to the outside of a yurt.

The plains are green with a variety of flora, and multiple yurts can be seen in the background. Poultry can also be seen in the midground. One of these yurts stands in the foreground; the felts bear swirly patterns and elaborate designs (such as a tiger and various emblems) in bright, cool tones, and arrangements of colored flags are used as exterior decoration. A red flag is flown atop the yurt. Outside the yurt, a maroon table and a campfire can be seen. Flags are also stood in immediate proximity to the yurt. In the far background, parts of the Mongolian mountain range can be seen.

During the daytime scene, the sky is light blue and sparsely clouded, with the horizon lit up in yellow sunlight. As the day changes to dusk, the sky gradually takes on an orange hue. When night falls, the sky becomes starry, a full moon is seen rising, and the campfire is now alight.

Gold Move 1: Raise your arms in two semicircles, while lifting your right leg in a stiff pose.
Gold Move 2: 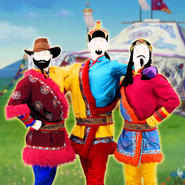 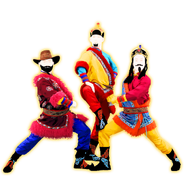 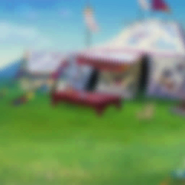 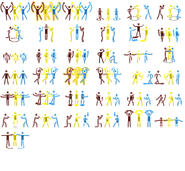 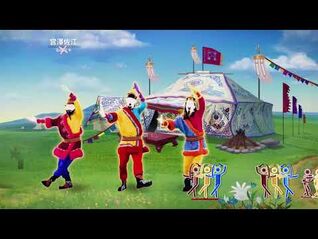