舞力全开：活力派
舞力全开2015 is a game in the Just Dance series. It is a Chinese version of Just Dance 2015, and is exclusive to the Xbox One and PS4, akin to the Japanese Just Dance games for the Wii and Wii U.

The Chinese version of Just Dance 2015 shares similar features with its western counterpart. Here is a list of the features:

Default names, as in names like Crazy, Jazzy, Baby, Happy.

The Dance Now tag on the routine selection screen is translated as 开始跳舞, which means Start Dancing.

The alternate routines from Just Dance 2015 are carried over into 舞力全开2015.

Mashups are available in this installment. 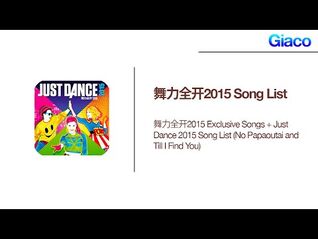