Rating Summary: This is a rhythm-and-dance simulation game in which players perform choreographed routines to a variety of popular songs. Players move their bodies in time with the music and movements of on-screen characters. One song mentions rum in the lyrics (e.g., “Work all night on a drink a' rum”).[1] 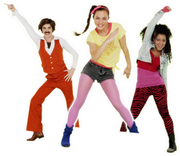 P1 of The Hustle, C2 of Footloose, and P1 of Hit Me With Your Best Shot on the startup screen

The left backup dancer of A Pirate You Shall Be, Hickory Dickory Dock, and P1 of Interstellar Simon on the startup screen

NTSC cover (Wii) (front and back) 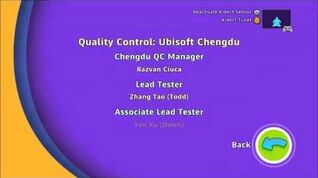