Just Dance Wii U
Just Dance Wii 2 (also known as ジャストダンスWii 2) is the second game in the Japanese series following Just Dance Wii. This game is built in the style of Just Dance 3, but lacks some of its features such as unlockable songs and the shop. Like in Just Dance 3, song lyrics are highlighted light blue when a male is singing and light pink when a female is singing, or if both a male and a female are singing. This game also includes Breakdown Mode, where the player can skip back and forth through a song in order to learn it better.

This section may have unconfirmed "leeks". You can help by citing it!
These songs were going to be in the game, as seen in the files, but were removed for unknown reasons.

Official Logo
Add a photo to this gallery 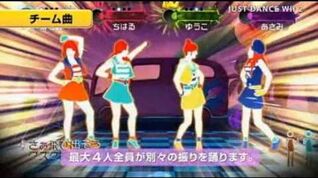 Retrieved from "https://justdance.fandom.com/wiki/Just_Dance_Wii_2?oldid=961503"
Community content is available under CC-BY-SA unless otherwise noted.