Bear Zhang[2]
"Levitating" (Extreme Version) is featured on Just Dance 2022, where the routine can be unlocked by achieving Superstar or higher on the Classic routine. It is also featured on 舞力无限 and Just Dance Now.

The dancer is a man wearing a sky blue top with the same golden design present on the Classic routine dancer’s boots as well as sky blue pants with navy blue boots. Additionally, he wears a red violet fingerless glove that also has some of the design found on the shirt. He also wears a purple helmet that has a black chin strap, a black visor with golden wings above it, and a navy blue triangle on top that glows, similar to the one in Si'ha Nova's head.

The background contains a colorful mix of space, musical, and traditional East-Asian elements in a psychedelic cartoonish style. It consists of six different sets.

The main element of the first background is a big vinyl, partially in a cover. In the middle of the cover, an archway with a sneak peek of the second set. There are also stairs leading to it. Above it, there is a big title of the song written. To the left of the cover, there is a big rectangle divided into two parts. The top one is a pink and white keyboard, while the bottom section is yellow with two notes and a treble clef. The backdrop has a blue and white zebra pattern. There are also many floating shapes that change their size.

The second set is used during the verses and it consists of pink space with many planets, stars and galaxies, as well as two kois swimming, floating swimming pools and several Chinese symbols. To the sides, there are waves in different shades of brown and orange. A triangle with many different shapes inside it can be seen underneath each of them. On the left, three circles with music symbols can be seen. On the right side, a rectangle with a cat sitting by a window can be seen. Below it, there is a word "STARLIGHT". The coach is dancing on a circular floor that consists of many smaller circles in various colors.

The background used during the pre-chorus, similarly to the second one, also has a cosmic pattern. However, it is now colored in blue. In the middle, a big UFO is shooting a colorful beam of light that transforms into the floor on which the coach is dancing. Around the UFO, the sky forms a pinkish circle with several orange clouds. On both sides of the background, there are two white tigers. Next to them, two rectangles can be seen. The one on the left has a Chinese pattern of red waves and the one to the right has several Chinese symbols on it. Many flames appear and disappear in various different places.

During the chorus, the space has a brown color. There are also several falling comets and flying rockets. To the right, a big moon can be seen. In front of it, there are several colorful mushrooms. Above them, there is a circle with a rose covered with glass. There are also several lines in different shades of orange coming from the left side and curving around the moon. A part of the lyrics, "I GOT YOU", can be seen on one of the lines. The ground is stylized as a desert, several cacti and boulders are placed around. There is also a line of mountains brown and pink mountains. A big green dragon is present on the left side of the screen. In the bottom left corner, an orange rectangle with lyrics "I NEED YOU ALL NIGHT" and "COME ON DANCE WITH ME" can be seen.

The fifth set features the same line of mountains and space as the previous one. In the center, there are three rotating circles made of peacock feathers. Next to them, two futuristic towers can be seen. There are also several light beams coming from behind the circles. In the bottom left corner, there is a circular rectangle with Chinese symbols. The scenery is surrounded with a tiled archway. On both sides of it, green windows with blue flowers peeking form them can be seen. Additionally, there is a line "IN THE SKY" from the song’s lyrics floating in the top center. There is also a set of colorful circles in the bottom left corner.

Finally, during the bridge the last set is used. The sky is sky blue and there are many falling comets. In the center, there is a sun with a road leading to it, on which the coach is now dancing. There is also a silhouette of a woman's face on the right side of the sky. The ground is pink, there are many lakes and boulders laying around. Several futuristic towers can be seen here as well. The scenery is surrounded by a circular frame with the lines "I BELIEVE THAT YOU’RE FOR ME" and "I FEEL IT IN OUR ENERGY" on it. There are several circles cut out on both sides with many curved lines coming out of them. In the top left corner, a pink keyboard can be seen. To the right, there is a bright yellow oval with headphones inside it.

Gold Move 1: Point up with your right hand and kick with your left leg in front of you twice.
Gold Move 2: Point your both arms out and do a spin.
Gold Move 3: Move your hands and feet in a "seesaw" motion and raise your left leg. 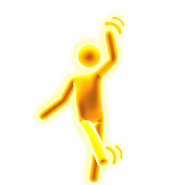 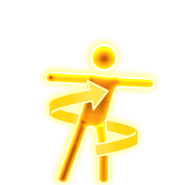 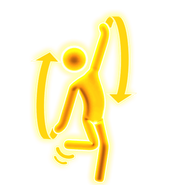 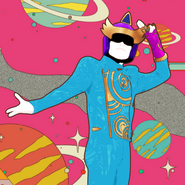 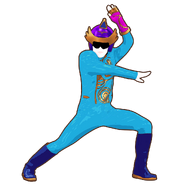 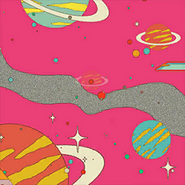 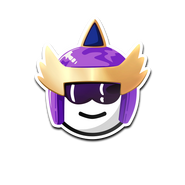 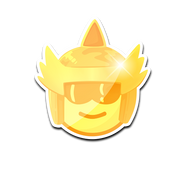 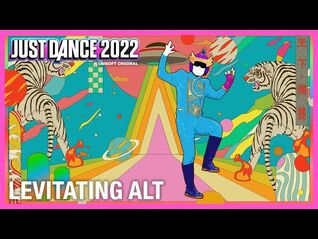 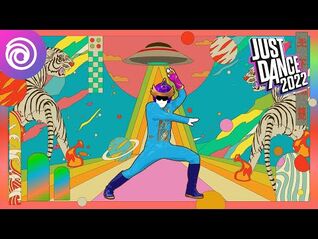