JDCBuyBuyBuy
"买！买！买！ (Mai! Mai! Mai!)" (also known as "Buy! Buy! Buy!") by LUNAR was planned to be on 舞力全开：活力派 but was never released into the game before the shutdown of the game.

The routine is performed as a duet of women, with the coaches in outfit with glitter and fashion glasses. They have thin black and white outlines.

P1 is female. Her hair is in two French braids and is black. She wears a furry, yellow jacket and a tight crop top with violet and purple colors. She has purple, sparkly pants with a black belt and yellow high heels. She has a turquoise necklace, yellow, dangling earrings, and a pair of pink sunglasses.

P2 is also a female. She has black hair. A yellow band with a pink star is wrapped around a section of her hair. She wears a light purple, sparkly jacket with two turquoise and yellow lines on it. She has a yellow, black and turquoise dress on with what appears to be a turquoise belt wrapped around her waist. She has a pair of pink sunglasses and yellow and purple high heels. 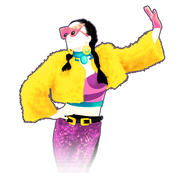 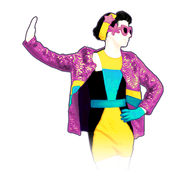 The background appears to be a dance floor with a screen with hearts on it on the back wall. On the left there is a pink easy chair in front of the spotlight and on the right there is only a spotlight. The walls are pink with different shapes on them.

Gold Move 1: Swing your arms with your elbows bent 90°, while running in place.
Gold Move 2: A wave Gold Move from P1 to P2. P1 crouches and stretches her right arm out, while putting the left one under her chin, and P2 bends backwards and puts her arms with her elbows bent 45°.
Gold Move 3: While standing on the left side, place your arms in a cross, by bending your left arm horizontally and hitting it with your right arm. 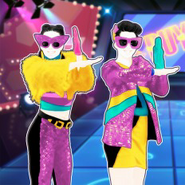 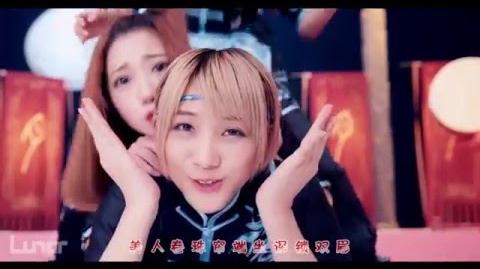 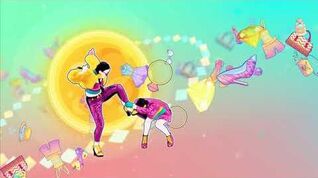