The dancers consists of a female and a male. They have a shadow-like outline.

P1 has green pigtails with an orange and blue beret. She wears a yellow long sleeved shirt with a blue cuff, reddish orange overalls with a yellow flower with a smiling face in it and line accents for her pockets and yellow rain boots.

P2 has a blue and yellow beret that covers most of his hair. He wears a green long sleeved shirt with a blue scarf on his neck and a white circle that contains a blue smiling star, reddish orange suspenders, blue pants and green shoes with dark blue soles. 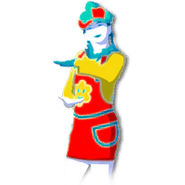 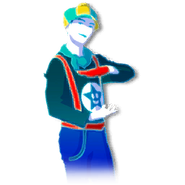 The background is composed of various childish pictures, colored with crayons. It changes from a hill with a house and some trees, to a rainy land with flowers, to a space scenery with the Earth, Saturn, and other stars. A tanuki dog constantly appears throughout the routine.

Gold Moves 1 and 2: Bring your hands down.
Gold Move 3: This is a Wave Gold Move which occurs in the following order:

Gold Moves 4 and 5: High five each other (in Gold Move 5, you have to swap positions).
Gold Move 6: Bow with your hands together.

Maru Maru Mori Mori! is featured in the following playlists: 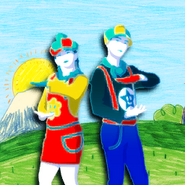 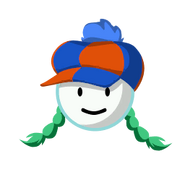 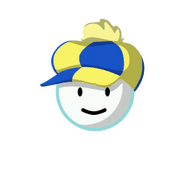 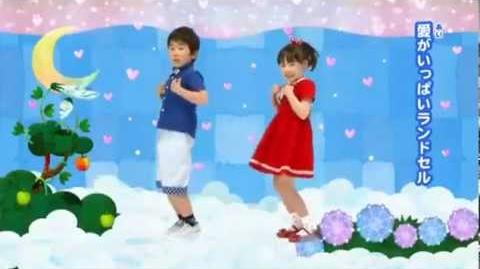