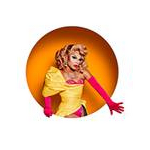 My NNID is sandraffe. Add me on the Wii U!

Don't claim A. Points from me. I'll tally them for you when you make a purchase.