Just Dance Wiki
Register
Don't have an account?
Sign In
Advertisement
in: Alternate Routines, Trios, All Female Trios,
and 6 more

< Mood
View source
watch 02:58
No Man's Sky Update - The Loop
Do you like this video?
Play Sound

P2: Lia Kim
"Mood" (Alternate Version) is featured on Just Dance 2022 where the routine can be played with internet connection. The routine is a collaboration with 1Million Dance Studio and is unlocked for play at the start. It is also featured on 舞力无限 and Just Dance Now.

The dancers is a trio of women.

P1 is a woman with smooth tied black hair in a low ponytail. She wears a white custom cropped top with an open cut on her chest, back and underarms, which composes of a bra-shaped section that is suspended by black and white strings that goes on her shoulders and detached long sleeves with a section that wraps around the neck area of her body and covers her hands while exposing her fingers. Below her cropped top is a thick black garter border. She also wears a pair of cobalt blue shorts with yellow strings and decorated with thin white triangles on the front and back and three yellow bars by the sides. She also wears a pair of white ankle-length socks and white thick shoes with laces. She also wears a black string necklace with a white polished stone. She has a red glove.

P2 is Lia Kim. She is a woman with black hair in a bob cut. She wears a light green open jacket, which exposes her white sports bra underneath. Her jacket also dark indigo sleeve sections, with a light red section and thin white borders and a garter at the end of the sleeves, which reaches to her elbows. She also wears a pair of light green jogging pants with designs similar to her jacket’s sleeves but is applied diagonally at the lower leg sleeves. She also wears a pair of thick white shoes with a black rectangular accent at the front part of the soles. She has a light-yellow glove.

P3 is a woman with black hair tied into a low ponytail, with a few loose strands on her forehead. Her ponytail also contains platinum blonde and brunette highlights. She wears a black cropped sleeveless top, with an unbuttoned portion at the cleavage and a small, elongated ovoid cut at the end. As seen on the cleavage, she wears an orange cropped top, and her cropped top also has an orange band placed above the cut. She also wears a pair of white jogging pants with light orange thick socks and white shoes with white and orange laces. She also wears a pair of small metallic circular earrings. She has a purple glove. 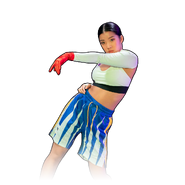 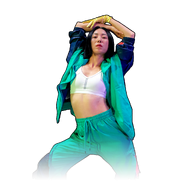 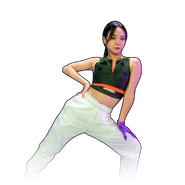 The routine takes place within a dance studio, which has a white floor and wall. Faint lighting is used in the background, where much of the front part of the back has white light while on the right side of the background is an indigo lighting. Unlit lights are seen above the ceiling near to the wall, along with a speaker in the corner of the wall and some black colored heavy electronic equipment. "1MILLION DANCE STUDIO" is projected in the right side of the wall, along with 1Million’s phone number and email address. Throughout the routine, the camera movement follows on the dancers, moving forward or backwards accordingly to some of their moves.

Gold Move 1: Use your right foot to spin to the right.
Gold Move 2: Move your right hand from your chest to your stomach. This is a left to right wave move.
Gold Move 3: Pose with your arms out. P1 and P3 slide toward P2 during this move. 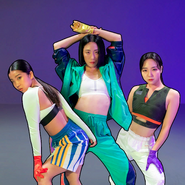 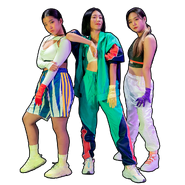 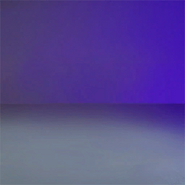 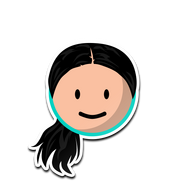 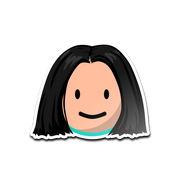 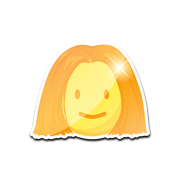 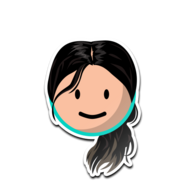 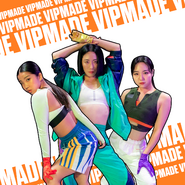 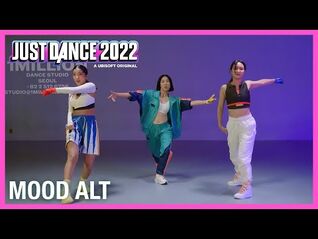 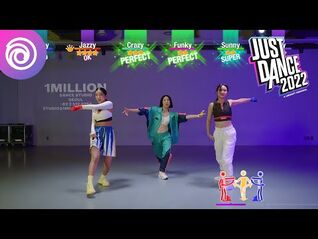 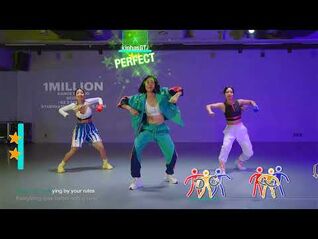 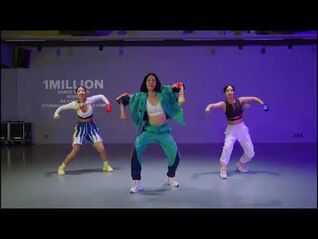 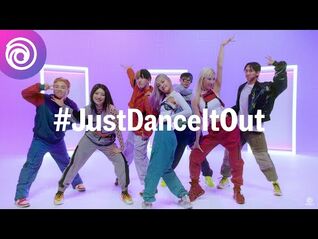