"No Tears Left To Cry" by Ariana Grande is featured on Just Dance 2019.

The coach is a woman. She wears a sparkly tight black swimsuit with full sleeves covering her arms, and leaves all of her legs exposed. The swimsuit has a deep V-shaped neck. Over this, she wears a golden semi-stitched suit that consists of a full golden sleeve on her left hand, with a stiff shoulder pad that meets around her neck in the form of a golden choker, and a half-suit that only covers the right half of her clothing and is secured by a golden belt that wraps around her body. Her shoes are black velvet heels, with a golden networked cover that covers the heeled part and around the heel, leaving the toes region uncovered by the cover. Her hair is a purple long simple ponytail that rests on her back and is paired with straight fringes.

During the chorus and the post-chorus, the costume changes into a bright yellow swimsuit that covers her upper body fully, leaving her legs exposed. She has the same golden stiff shoulder pads. A long translucent bright yellow silken cape is wrapped around her arms and it flows about her figure. Her shoes are the same as before, except the black inner boot is now the same shade of golden as the boot cover. Her hair is black, straightened, and open with straight bangs.

At the start of the routine, the camera is placed on lower ground where a dark silhouette of the dancer can be seen on higher ground. As the camera moves up, more of a dark cave-like space composed of dark stones shooting from the back and sides of the cave is revealed and the silhouette turns to the dancer's usual colors.

In the parts between the choruses, the camera moves to where the dancer is centered in the middle, where more of the sides of the cave are also revealed. The more she keeps dancing, the more often the stones around her bulge out at the back of the cave and flash gold to the song’s beat. Bigger stones from the sides can also be seen and they slowly glow gold and then fade to their usual black. There are also small openings where faint sunlight pokes through the stones and flash to the beat as well. Few particles of gold dust can also be seen raining down around the dancer and in front of the camera. As the song nears the start of the choruses, the back of the cave breaks apart to reveal an enclosed opening composed of vertical silver bars, mimicking silver cell bars.

In the chorus, sparkles of gold dust transform the dancer, and the opening separates and slides apart. The camera appears to move out of the cave to reveal a top view of golden pathways that spontaneously grow golden trees as the camera zooms up. This is followed by a flash of white light transforming the background to a bottom view of dark tangled tree branches. All throughout the choruses, more gold dust rains down through the pathways and branches, around the dancer, and in front of the camera as well. The view of the camera appears to travel upwards to the top of the tree, but in the middle of its travel, another flash of white light teleports the dancer back to the cave for the second verse.

After the end of the second chorus, the flash of light transports the dancer to a network of tangled tree roots that look as if they are also made of gold dust. Faint glowing hues of gold can also be seen flashing around various sections of the roots. Right after Gold Move 1 occurs, a far view of the golden pathways with golden trees is seen before the camera zooms in to how they did look during the choruses.

In the outro, the dancer transports back to the cave without having a flash of white light assist her in doing so. The sides of the stones flash a slight gold to the beat as the song ends. The camera also returns to how it was at the start of the routine.

Gold Move 1: Cross both of your hands over your face.
Gold Move 2: Point to the right with your right hand with your arm bent. 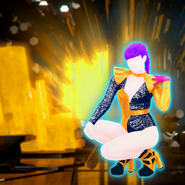 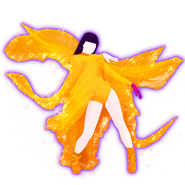 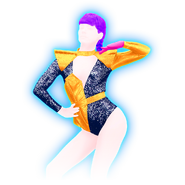 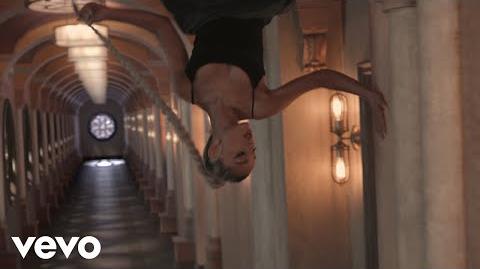 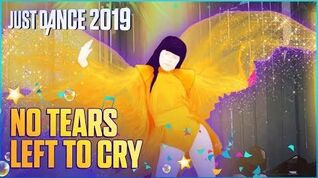 No Tears Left To Cry - Gameplay Teaser (US) 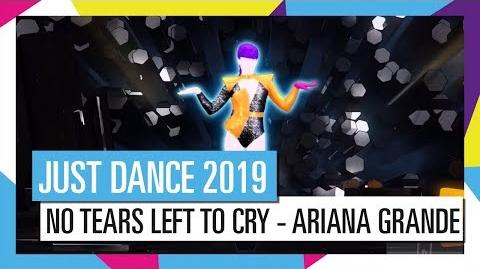 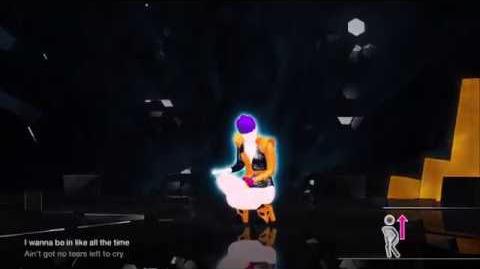 Retrieved from "https://justdance.fandom.com/wiki/No_Tears_Left_To_Cry?oldid=958319"
Community content is available under CC-BY-SA unless otherwise noted.