The dancer is a man with short black hair and a beard. He is dressed like a superhero. He wears a black futuristic visor in his eyes and he also wears a bodysuit with a cape. The suit contains a dark emerald green color scheme, with light turquoise green futuristic lines and designs decorated all over the suit. There are bright orange patches on the chest and on the kneecaps, which glows pink to the beat of the music. The neck area and the yellow cape is fused together, with light turquoise green suspender straps and baby buckles originating from behind the neck to below the back. The cape also has a light turquoise green trim on the end and has a baby pink patch placed on the left shoulder, which also has a light turquoise green futuristic emblem in it. His shoes are fused together with the suit, bearing designs similar to the suit. He starts with a lime green outline, which changes into a pink outline in various parts of the song as well as in the ending.

The background zooms into an empty digital landscape, with futuristic hexagon designs as well as magenta digital wires hanging around loosely. Magenta circles are placed in the center, in which the coach appears in a glitched digital-like fashion. As the music is heard and the coach activates his visor, various images and holograms start to appear.

In the first segment, the landscape is decorated with magenta and dark blue holograms, which features a futuristic screen and banners. The screen is loaded with three holographic images that depicts food such as a hamburger, a turkey leg, a packet of fries and a hotdog that slowly gets "eaten" before disappearing and reappearing again. There is also a holographic image of a large feline with sunglasses and a pinwheel attached on the head, bopping its head to the music.

In the second segment, the landscape has an orange and dark green gradient and the holographic screens and banners change with light turquoise green and orange color schemes. On the screen, there is a heart made of bright red-orange cubes that pulses to the music while a heartbeat rate is recorded from a two-dimensional image of a cat prowling. Another holographic image is shown, this time it is a dog with headphones. The futuristic shapes on the floor are changed to triangles.

In the third segment, the landscape has a darker gradient and orange is changed to dark red-orange, with the holographic banners and screen turning red. The screen features various mundane items such as table tennis paddles with a table tennis ball, headphones, traveling bags, badminton racket, and sunglasses, serving as an advertisement platform. The holographic image in this segment is a cat with sunglasses that projects yellow dollar signs on each lens. The shapes on the floor are changed back to circular, but slightly more numerous and thinner. Several holographic coins fall from above and hit the floor in two different portions of the routine.

During the chorus, the landscape changes its gradient to yellow and emerald green and the three holographic heads become united, surrounding the coach. A digital landscape of hills is formed around the feet of the dancer, pulsing to the beat. Banners also appear, depicting the food from the first segment.

During the outro, the dancer uses his visor again, deactivating much of the digital landscape. He swipes away the holographic heads with his hands before returning to his starting position, leaving the background in the same way he appeared. This time, the digital wires are yellow instead of magenta.

Gold Move: Put your hand above your eyes and move your head from right to left. 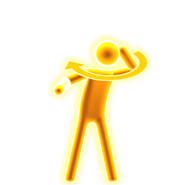 Panini is featured in the following playlists: 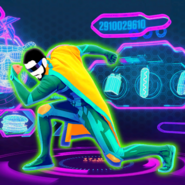 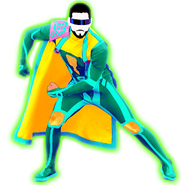 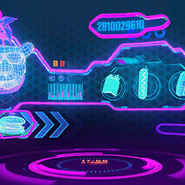 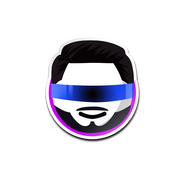 Panini on the Just Dance 2020 menu 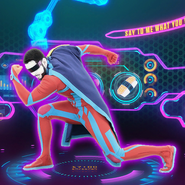 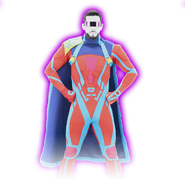 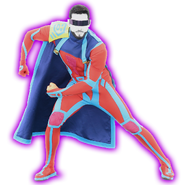 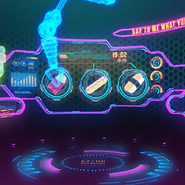 The coach in the Just Dance 2020 Power Party teaser

The coach's foot cut off 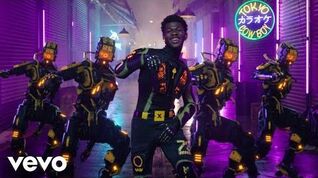 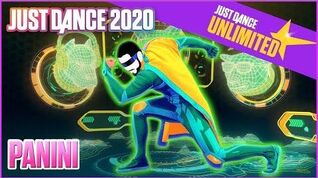 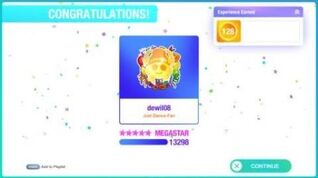 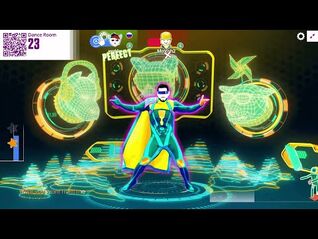 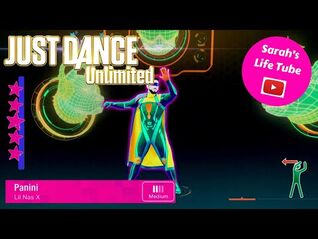 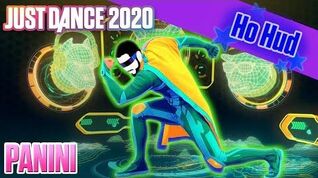