"Pinball Wizard" by The Who is featured on the PS3 version of Dance on Broadway.

The routine is performed by a duet of two men. They have brown puffy hair.

P2 is wearing a maroon shirt underneath a golden vest, maroon pants with three yellow laces and brown shoes.

The background is inside of a pinball machine. The floor is reflective. At the sides of the screen there are red, white and black walls. Behind the dancers there are three circular, red, white and black structure. There are three people dancing on them, each person on a different structure. Behind these circular structure there is a slide with yellow arrows at the sides, and a white circle on the center. The slide also has some blue frames that light up during the song.

Pinball Wizard on the Dance on Broadway menu 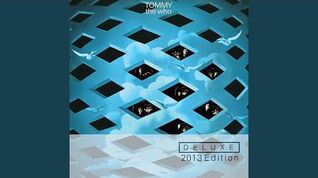 The Who - Pinball Wizard (Audio)

Retrieved from "https://justdance.fandom.com/wiki/Pinball_Wizard?oldid=1260711"
Community content is available under CC-BY-SA unless otherwise noted.